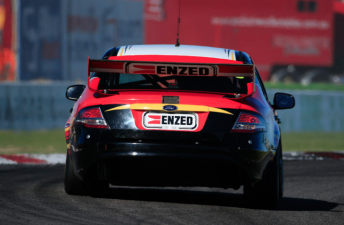 Prodrive Racing Australia young gun Cameron Waters racked up his fifth Dunlop Series victory of the season with a dominant run in the Winton opener.

The Mildura born racer didn’t put a foot wrong after converting his pole position into a relatively straight forward win in the 18 lap heat at the Victorian circuit.

Waters was unable to completely relax with Andrew Jones in his mirrors for the entire race, although the Brad Jones Racing driver was unable to really challenge for the lead.

The race was not without incident with race control forced to deploy the Safety Car after an eventful opening lap.

Slow starts from Le Brocq and Chris Pither saw the pair both run wide at Turn 1, which triggered a multi car incident as they tried to defend their positions.

Garry Jacobson was caught up in the bottleneck leading to contact with Macauley Jones, which forced the latter out of the race.

Meanwhile, Simon Evans ran wide at Turn 2 before Jason Leoncini spun off the circuit at high speed later in the lap.

There was plenty of action once racing resumed highlighted by a strong drive to fifth from Garry Rogers Motorsport’s James Golding, while a recovering Pither salvaged sixth.

A fighting drive from Ant Pedersen earned him seventh position ahead of Jesse Dixon, Josh Kean and Paul Morris, who rounded out the top 10.