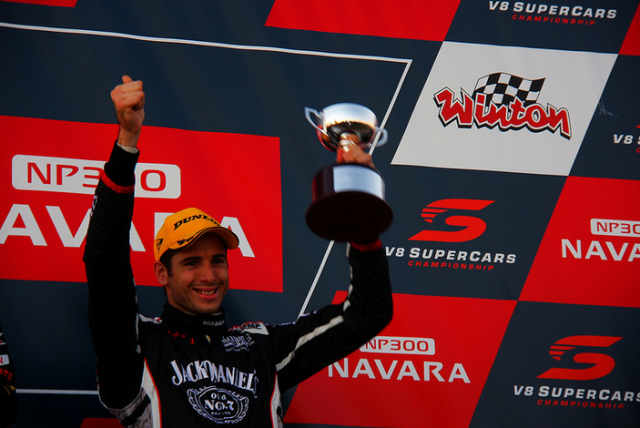 Rick Kelly says that breaking a 116 race podium drought is a shot of confidence as the former champion continues to develop as a driver.

The 32-year-old has admitted to doubting his future in the category during tough recent seasons developing his team and its Nissan package.

While still down on power as work on a major engine upgrade continues, Kelly made the most of the tight Winton layout by finishing second in Race 11.

The result marked his first podium since winning at Sandown in 2011; three months prior to the Nissan deal being signed off.

“You go through all sorts of things in your mind…” Kelly told Speedcafe.com when asked of the drought’s personal impact.

“Once you start running towards the front you get confidence, get a good base set-up and work better with your engineer and the rest of the team.”

“I’ve always been a good racer but have needed to do some work on qualifying,” Kelly said.

“I’m a driver that absolutely gives a shit about every single lap that I do and because of that I get quite nervous.

“Heading into qualifying I know how much it means and it puts a lot of pressure on myself.

“This year working with George has helped my mindset. I’ve been a lot more relaxed about it and am treating it (qualifying) more like a practice session than anything.

“I’ve done a better job of getting the most out of the car. I’ve been in it a while but I’m still learning a lot and there’s still more to go.”

While Winton is a kind track to the Altima, the team is expecting to be a more consistent force when its new cylinder head comes online in August.

“There will be no better feeling when we get to the point where we’re winning,” Kelly added.

“We haven’t been gifted anything, we’ve had to work for everything; engine, aero, the whole thing.

“We’ve pioneered this with V8 Supercars and there are areas that could have been done better and we’ve been the ones to have suffered from that.

“We’re happy with where we’re at now and it’s exciting for us to be grabbing podiums while we’re still in a development phase with the car.”