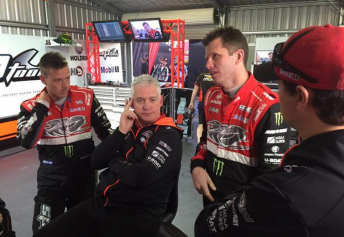 Walkinshaw managing director Adrian Burgess is adamant there will be no ‘Prost and Senna’ rift between James Courtney and Garth Tander after the pair’s clash in Race 11.

Courtney took out Tander and Walkinshaw’s Lee Holdsworth-driven customer entry after out-braking himself at the opening corner of the day’s second heat.

The incident compounded a horror day that saw all four Walkinshaw Holdens miss the top 10 in qualifying for both races.

“One of the first rules and biggest rules of a four car team is you don’t take your team-mates out.

“I won’t sit here an defend him (Courtney) but I don’t need to. He’s a big boy and he’s admitted he’s made a mistake.

“As a team we haven’t done a good enough job. We tried to improve the cars for the second race but as a team we lost 75 percent of our information at the first corner with three cars wrecked.

“Clearly I’m not happy but there’s no point going on all night. We’ve got to make the cars quicker.”

Courtney could only apologise for his mistake immediately after the race, which he completed in 23rd place, running a set of wet tyres in order to save his race rubber.

“It’s my fault; I took my team-mate out so massive apologies to Garth and the boys as they have worked their arses off,” he said.

“It was a silly mistake and it cost us heavily. Unfortunately an apology to GT is not going to mean much to him at the moment.”

Tander was quick to publicly dismiss the incident, stressing the importance of improving the cars for Sunday.

“It’s not ideal it is not a great day for the team but there is nothing we can do about it now,” he said.

“We will have chat tonight but the most important thing is to make the car go faster.”

Burgess says that any potential animosity over the incident will be thrashed out during the team’s debrief before leaving the circuit.

“It’s my job to make sure there isn’t (any ongoing issue),” he said.

“It won’t fester on. We’re not going to have a Senna-Prost relationship starting.”