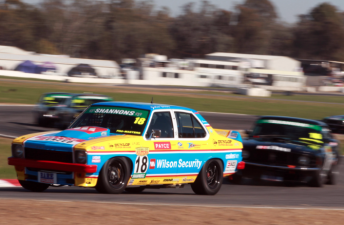 John Bowe capped an impressive debut behind the wheel of a Holden Torana with a double victory in the Touring Car Masters at Winton.

The reigning Touring Car Masters champion even surprised himself with his display in the newly built Torana SL/R 5000.

“It’s been a great day and a great little car,” Bowe said.

“I honestly wasn’t expecting it to be this good, though if there was going to be a track that suits the car, it’s here.

“We’ve made a few changes but nothing that has required us to think outside the usual parameters – the car is great.

“I’m most pleased for Gary O’Brien and his team. It’s been a two and a half year process to build the car and a real labour of love, it’s great to be able to reward that.”

The Touring Car Masters will play out a third 10 lap sprint on Sunday.

Thomas Randle took victory in the Kerrick Sports Sedans with a lights-to-flag run to the chequered flag.

Perkins had leapfrogged Ricciardello at the start but a mechanical problem saw him retire after only two laps.

Meanwhile, an off track excursion for Ricciardello on lap six saw the Alfa Romeo driver come from behind to claim third at the finish.

Randle took the victory by 18s from the Holden Calibra of Steven Tomasi.

Polesitter I’Anson managed to hold off Mark Laucke to take the chequered flag in the opener by eight tenths of a second.

He was unable to repeat the feat in the second race with his hopes dashed after stalling on the grid.

I’Anson battled hard to come through the pack to finish second behind Steer, who led from start to finish.