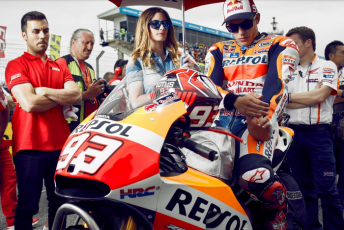 The Honda rider was forced to ride through constant pain to second place at the Spanish Grand Prix having fractured his little finger in a motocross accident prior to the race weekend.

Marquez says the worst is now behind him ahead of this weekend’s fifth round of the world championship at Le Mans following a check up on the injury since Spanish Grand Prix at Jerez.

“Here we can say that the finger is already at 100 percent,” he said.

“It’s a little bigger than usual but I already have the power that was the biggest problem in Jerez.”

The 22-year-old heads into Le Mans 26 points behind championship leader Valentino Rossi following a relatively slow start to the season by his high standards.

Although Yamaha has won three of the four races this term, Marquez says he is not starting to panic over his title defence aspirations.

“This year I’m fourth in the championship and 26 points behind Valentino.

“Still there are 14 races (to go). It’s not a panic inside the team so we will try to continue like we did until now because I think we have a good level.

“We will see. We did a couple of laps on Monday. For the test we try a few things and here we have some things to try and improve on the exit of the corner.”

*Stay tuned to Speedcafe.com for all the latest MotoGP news from France across the weekend.