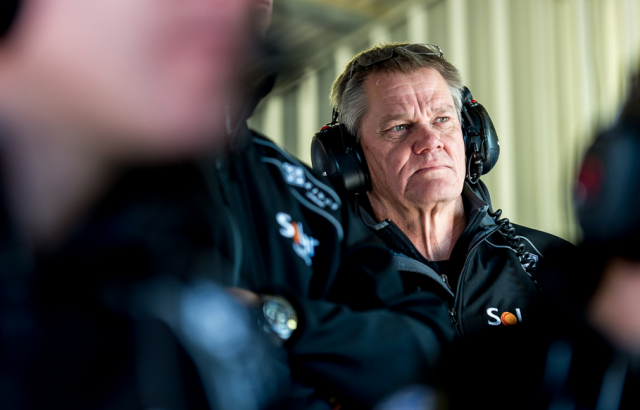 Campbell Little in the Erebus garage

Campbell Little has made his first trackside appearance with Erebus Motorsport at Winton as the squad continues efforts to improve its operations.

The experienced engineer and manager has not worked in the V8 Supercars paddock since the end of last year, where he finished the season at Lucas Dumbrell Motorsport.

As previously reported, Little has been drafted into Erebus on a part-time basis, working with the squad’s GT manager Barry Ryan to review and improve the team.

CEO Ryan Maddison is not at the circuit this weekend – the first V8 Supercars event he has missed since Erebus V8’s formation in 2013 – as he focusses more heavily on the team’s commercial efforts.

Little’s input into the technical side of the team has seen him assisting Erebus’ engine department over recent months; an area where the Mercedes has made notable gains.

“I’ll primarily just be watching and understanding who does what and how they do it,” Little told Speedcafe.com of his weekend.

“Most of the guys have been here for a long time and always seem to do a good job at races.

“Barry has already observed and formed his opinions and once I’ve done the same we’ll see what or if any changes need to be made.”

Little says that the restructure of the team is “about making it more of an Erebus entity than an ex-Stones entity”.

Little is not ruling out a full-time position at Erebus in future, but remains committed to a trackside role with Maranello Motorsport at events that also feature the Australian GT Championship.

“I like this part of motorsport,” Little said of V8 Supercars, having also previously undertaken stints at SBR, Triple Eight, Prodrive and in the category’s only technical department.

“It’s different to the other things I’ve been doing with both GT and Porsche, which are fairly relaxed by comparison.

“In some cases with Erebus it’s like being back home walking into the building and seeing some of the old faces from the SBR days.

“I think my experience will help the team and, for me, I get satisfaction out of trying to build something up or repair something.”

Little stresses the importance of process management in V8 Supercars teams, which must make the most of the extremely limited test and tyre allocations with which to learn.

He notes that development is more complex than ever under current rules that see every engine specification change needing to be homologated and logged with V8 Supercars.

“Unfortunately everything takes longer than in the past,” he said.

“We’ve got to not just come up with the ideas, but get them to the cars and tested within the practice session structure that we have.

“It’s a massively complex process and not a cheap one for the teams, either.”

Erebus took victory last time out at Barbagallo, with lead driver Will Davison benefitting from a well timed Safety Car to storm to the front in the closing stages.