Despite making a slow start to the 161 lap Mount Panorama epic, Winterbottom, partnered by Steven Richards, worked themselves into a race winning position, before coming under immense pressure in the closing stages from Triple Eight Racing’s Jamie Whincup.

Winterbottom held firm despite Whincup trying to pass the Ford at Griffins Bend on the final lap to score a famous victory by just 0.47s.

The Bathurst-conquering FPR-1214 chassis, decked in its Pepsi Max contemporary livery, is for sale complete with the engine block and transaxle used at Mount Panorama in 2013.

A CAMS log book is included in the package alongside spares and trackside support. 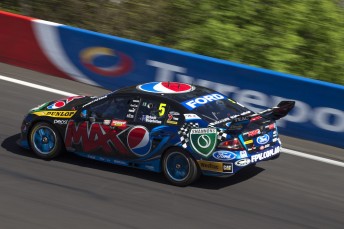 Following its restoration, the car is prepared for racing or track day outings.

The Falcon would also make a valuable museum piece for a V8 Supercar memorabilia collector.

A contemporary Bathurst winning car coming onto the market is a unusual occurrence, making this an extremely rare chance to own a real piece of Australian touring car history.

Prodrive Racing Australia has chosen Speedcafe Classifieds to advertise the sale of this history making car.

For the chance to purchase this valuable piece of Bathurst 1000 history and much more, simply click here and register for free.