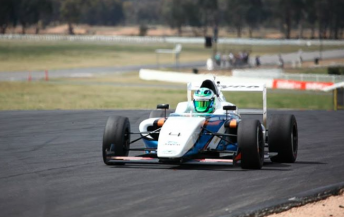 McElrea Racing is set to sit out the opening round of the inaugural CAMS Australian F4 Championship, saying it will join the series later in the year.

The Queensland-based operation has been eyeing a potential three car entry into the new junior single seater category, but has run out of time to commit to the inaugural round at Townsville on July 10-12.

Although due to be absent from F4’s big kick-off, the team boss Andy McElrea says his outfit has not given up on joining the championship at some point during the season.

“We have run out of time to start the championship,” McElrea told Speedcafe.com.

“We are still very keen to join the championship during the year or a worst case scenario join the series for the start of the 2016 season.

“I think it is fantastic concept and we are very keen to be involved and to be one of the inaugural teams committing to it.

“But the two factors we have is the timeframe to the first round and the commercial viability of it.

“I think we have at least a 50/50 chance of competing in the championship before the end of the season.”

Earlier this month, CAMS Motorsport Development Manager Cameron McConville stated that the series is aiming for a 15 car grid at the Townsville opener.

Team BRM, AGI Sport and DREAM Motorsport have already committed to the championship which equates to 11 entries from CAMS’ 20 car allocation purchased from French manufacturer Mygale.

The championship completed its first official test day at Winton last week which saw all three of the confirmed squads participate.

DREAM Motorsport’s Thomas Randle topped the timesheets in both sessions.