Colombian driver Carlos Munoz has become the first driver to crack 230mph after topping the third practice session in preparation for the Indianapolis 500 on May 24.

Australian James Davison did a super job behind the wheel of the #19 Dale Coyne entry, ending the six-hour session fourth fastest in 228.04 (366.99) after putting 88 laps in the books.

The cousin of V8 Supercars driver Will Davison tweeted: “Productive day working on race setup. Pleased with what we accomplished.”

Munoz, who is 11th in the IndyCar Series standings, said he is showing the benefit of experience at the 4km super speedway and gleaning knowledge from his Andretti team-mates.

“It’s practice and whoever is going to get the tow will finish first but the positive thing is the car feels good in traffic and when I’m on my own,” Munoz said.

“I feel really good in this place, so it feels nice. What I really, really want to do is win the 500.

“It’s nice to be first in practice and everything, of course. We are working hard at the 500.”

In fastest laps without drafting assistance, Munoz was 18th, Bell ranked fifth, Kanaan was eighth while Davison was 31st with a 221.33 (356.19) tour without a tow.

Team Penske sent three-times Indy 500 champion Helio Castroneves back out in the back-up car for shakedown laps following his scary acrobatics where his car did a backflip after striking the wall between turns 1 and 2.

Castroneves ended 15th fastest after topping the Practice 2 results the day before. 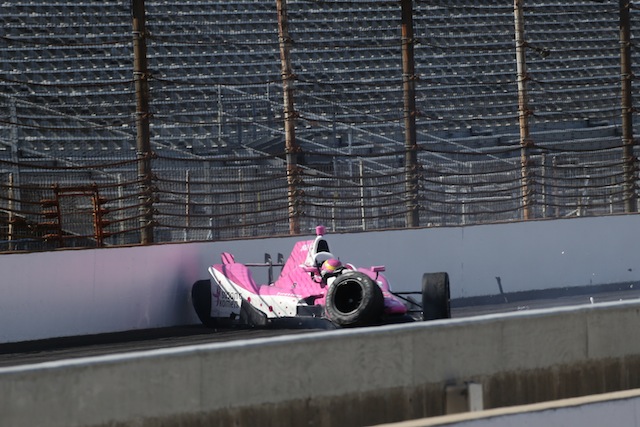 Another nasty incident saw Pippa Mann in the medical centre after spinning in turn 4 but was later cleared of any injury.

The rear of the #63 Dale Coyne Honda made contact with the inside wall then the nose struck the attenuator at the entrance to pit lane.

Practice 1 pacesetter Sage Karam was fifth with Scott Dixon (fastest without a tow), Simon Pagenaud, Will Power, Marco Andretti and James Hinchcliffe filling the remainder of the top 10.