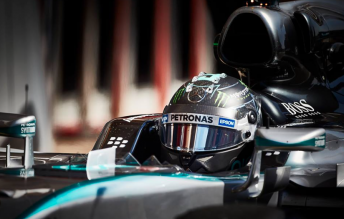 Spanish Grand Prix winner Nico Rosberg lit up the timing screens on the first day of the Formula 1 in-season test at Barcelona.

The Mercedes driver completed 146 laps on the opening day of the test at the Circuit de Catalunya, posting a session best of 1.24.374s.

Rosberg’s best time, which proved to be 0.3s quicker than his pole position lap, arrived while testing an unmarked new Pirelli compound tyre.

The majority of the field tested a raft of new updates to be used for the upcoming races.

Such was Mercedes’ pace, Sauber’s Marcus Ericsson, one of five full-time F1 drivers on display, emerged as the Silver Arrows’ nearest rival, with the Swede 2.250s adrift.

Ferrari young gun Raffaele Marciello was third fastest for the Maranello squad with his best effort from 125 laps just 0.024s shy of Ericsson.

Pascal Wehrlein was forced to sit out the test due to illness which elevated British GP2 driver Nick Yelloly into an early F1 debut with Force India.

Yelloly, who was originally due to make his debut on Wednesday, ended his maiden run in an F1 car in sixth position.

Fellow F1 debutant Pierre Gasly was encouraged by his performance for Toro Rosso that saw the Frenchman post the seventh fastest time after 131 laps.

The Williams of Felipe Massa was eighth after only 54 laps, while McLaren’s Oliver Turvey was ninth with his best time 4.1s adrift of Rsoberg.

The Woking squad tested a raft of new updates as it continues to close the gap to the front runners.