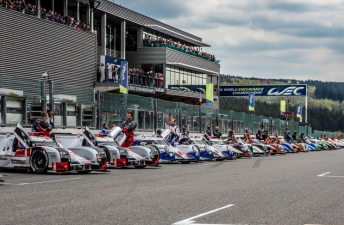 The WEC field lines-up at Spa earlier this month

The field sees a solid line-up of 14 LMP1 runners, up from the nine which competed for outright honours last year.

Despite a troubled testing program, Nissan’s global motorsport boss Darren Cox has confirmed that the front-engine and front-wheel-drive LMP1 machines will enter as hybrids.

However Nissan is yet to reveal which energy subclass – 2, 4, 6 or 8 megajoules – it will run in.

Questions also remain over whether Toyota’s Kazuki Nakajima will take his place in the #1 TS040 after injuring his back in a crash during the previous round of the World Endurance Championship at Spa.

The final field also sees a total of 19 LMP2 runners with nine in GTE-Pro and 14 in GTE-Am.

Mark Webber (#17 Porsche 919 Hybrid) and Ryan Briscoe (#63 Corvette, GTE-Pro) are the only two Australians among the 168 drivers in the field.

GP2 Series star Mitch Evans is looking for a back-to-back victory in the JOTA Sport Nissan in LMP2 following his Spa win while Richie Stanaway is listed in the #99 factory Aston Martin in GTE-Pro.

An all-in practice session is scheduled at Le Mans on May 31.