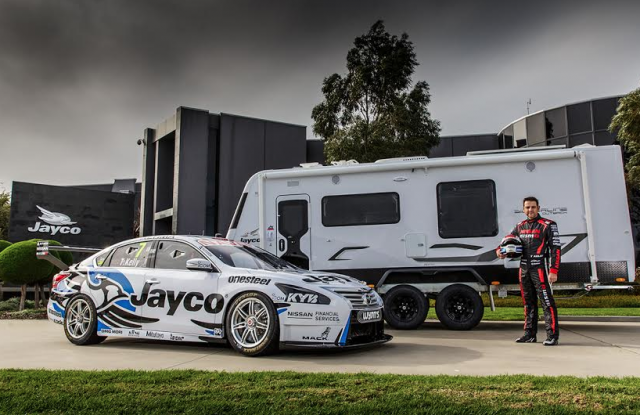 Todd Kelly with his Jayco Altima

The team says it has inked a ‘multi-round’ deal with Jayco to back the former Bathurst winner’s entry, which is without a full-time primary sponsor this year.

Kelly currently sits 13th in points after an encouraging start to the season that has seen the 35-year-old highly competitive against his three team-mates.

The veteran will pass Dick Johnson for ninth on the list of all-time ATCC/V8 Supercars event starts when he lines up for his 205th meeting this weekend.

“Our team works very hard on bringing great new sponsors into Supercars as our sport continues to grow, and this is another great example of that,” said Kelly of the Jayco deal. “It’s also exciting for me to debut the new colours at our home event at Winton.

“It’s a track that has been kind to us in the past and we’re hoping we can continue our push forward there.”

The deal marks a return to full car V8 Supercars sponsorship for Jayco.

Jayco is also the major sponsor for this year’s inaugural Australian Formula 4 Championship.