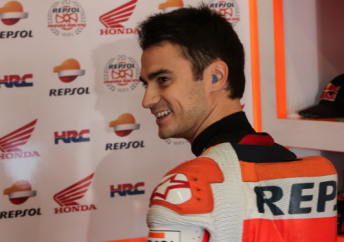 Honda’s Dani Pedrosa is set to return to MotoGP action in this weekend’s French Grand Prix at Le Mans.

The Spaniard has been forced to sit out the last three grands prix due to arm pump, which has seen his ride taken over by Honda test rider Hiroshi Aoyama.

After under going prolonged therapy for the condition, Honda has confirmed the 29-year-old will rejoin the world champion squad for the fifth round of the championship.

Pedrosa has dropped to 14th in the championship standings in his absence.

“I’ve been doing a lot of therapy in the past few weeks since the operation and I am improving step by step,” said Pedrosa.

“I’m beginning to feel stronger and looking forward to getting back on the bike – after all, this is the best way to check the feeling after all the rehabilitation work.

“It will be good to get back to my team and catch up with them all after this time and of course to see all the fans in Le Mans, so let’s hope the weather is kind to us again like in 2014.”

Elsewhere, Ducati’s Andrea Iannone has dislocated his shoulder after a heavy crash during a private test at Mugello.

The Italian, who will undergo treatment on his shoulder this week, intends to compete at Le Mans despite the injury.

“In the end it was a useful two-day test and I am happy with how I was doing, even though unfortunately at the end of the session I crashed at Arrabbiata 2 and banged my left shoulder pretty hard,” said Iannone.

“In any case I’m satisfied with the way we are working, especially because the bike is still new and so we need to try different solutions in order to find the best set-up.”