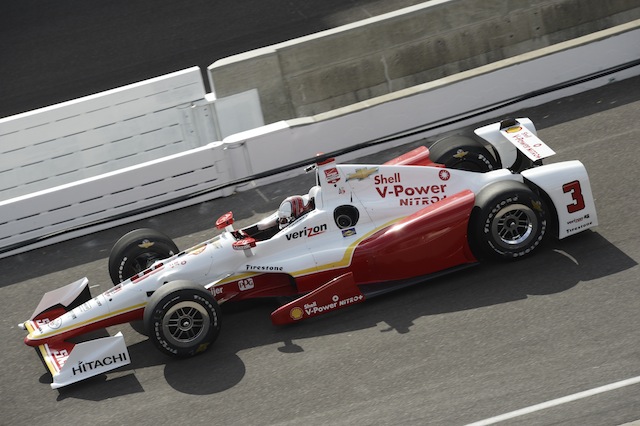 Brazilian veteran Helio Castroneves has led the second round of practice ahead of the May 24 running of the Indianapolis 500.

The speeds rose markedly over the opening day with Castroneves turning a best lap around the 4km oval of 227.51mph (366.14km/h).

Searching for a fourth Indy 500 win to join another Team Penske great, Rick Mears, Castroneves logged a total of 72 laps across the afternoon-long session.

Team-mate Simon Pagenaud is benefitting from tutorials from Mears and was second fastest after a busy schedule that saw him put 93 laps in the books with a best lap of 227.38mph (365.93km/h).

“He has been a very good mentor; helping me trying to manipulate the car to do what I want it to do.”

Justin Wilson, fourth fastest, brought the session to a premature close with just over three minutes remaining with smoke billowing from the rear of his #25 Andretti Autosport Honda.

While not as dramatic, it was the second such problem for the team with Simona de Silvestro forced to flee from her #29 Andretti machine which erupted in flames with an apparent fuel leak.

Townsend Bell, who is making another Indy 500 cameo, was fifth fastest ahead of Will Power, Tony Kanaan, JR Hildebrand, Marco Andretti and Carlos Munoz.

Series leader Juan Pablo Montoya ended up 20th of the 34 cars to take to the super speedway.

See below for Practice 2 results