Rose has once again landed a drive with the factory Aston Martin squad upon the request of co-driver and the British manufacturer’s former CEO Dr Ulrich Bez.

Incredibly this will be Rose’s 12th consecutive appearance at the iconic endurance classic at the infamous 20.8km Nurburgring Nordschleife.

His first came in 2004 when Rose campaigned a Mitsubishi Mirage.

“This will be my 12th consecutive time but I’ve done 13 races there and this will be my fourth time with Aston Martin,” Rose told Speedcafe.com. 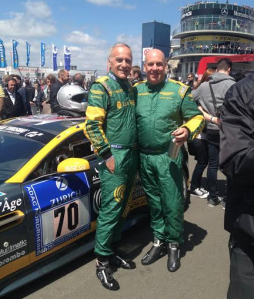 “This year is the retirement year of the former Aston Martin CEO Ulrich Bez, so it is a big deal for Aston Martin.

“Dr Bez has actually requested my driving services because he trusts me as a driver.

“It is quite an honour I can’t believe at my age that the boss at Aston Martin would actually suggest that to David King the Aston Martin motorsport manager.

“I’d rank the event alongside the best GT races in the world.

“I prepared myself years ago for this event by going there in a small car.

“It’s a real challenge but luckily I’m very race fit because I’m in a racing car almost every weekend.

“Everything about the event is unique.”

The Aston Martin factory team has offered a drive to Queenslander Liam Talbot following an impressive showing with the squad during last year’s event.

Talbot has been promoted to the #48 Vantage V12 alongside Florian Kamelger, Peter Cate and Wolfgang Schuhbauer.

New Zealand GT and single seater star Richie Stanaway will be among the contenders for the race outright in one of two all professional works Aston Martin entries alongside British GT driver Jonny Adam and Matthias Lauda.