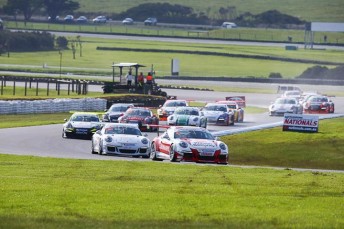 The full 44 driver line-up for the Phillip Island Carrera Cup Pro-Am has been released ahead of the May 22-24 Shannons Nationals event.

Experienced V8 Supercars co-drivers Dean Fiore, Alex Davison, Steve Owen and Dean Canto will also feature in what is expected to be a hotly contested pair of 36 lap races.

Emery will partner Shae Davies, who is running a part-time Carrera Cup schedule this year in between his own Dunlop Series duties with Matt Stone Racing.

The Carrera Cup Pro-Am is one of two feature events at the Shannons Nationals meeting, with the Australian GT field also hosting its Phillip Island 101 enduro.