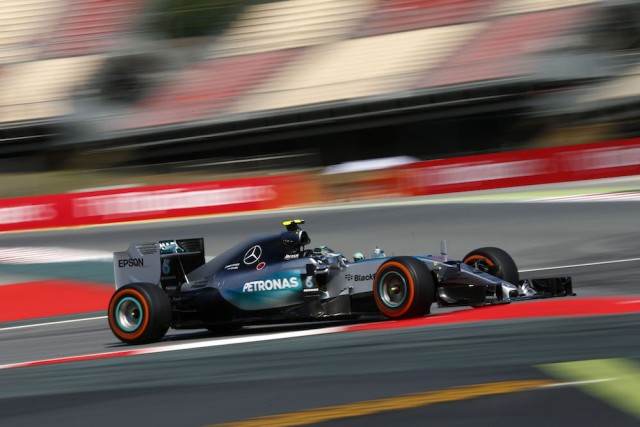 Nico Rosberg summoned an answer to Mercedes team-mate Lewis Hamilton’s dominance by producing a commanding drive to victory in the Spanish Grand Prix.

Last season’s championship runner-up made no mistakes from pole position to set up what turned out to be a faultless run to his first victory of the 2015 season.

Rosberg took the chequered flag with a relatively comfortable margin over rival Hamilton, with the Ferrari of Sebastian Vettel a distant third.

“It was the perfect weekend. It was great to be on pole and then win the race like this,” said Rosberg.

“Finally I got a great start as well. It has been a while coming, but today it really worked out really well.”

Reigning world champion Hamilton dropped to third behind Vettel on the run to Turn 1, where he would stay for the majority of the race.

Unable to find a way past Vettel, Mercedes switched Hamilton to a three stop strategy having failed to under cut the German in the first round of stops.

Hamilton pushed hard in the closing stages but there was nothing he could do to stop Rosberg, who controlled the race from start to finish.

Valtteri Bottas was embroiled in a race long battle with the sister Ferrari of Kimi Raikkonen that saw the Finn edge the 2007 world champion to fourth.

A strong race for Williams was further boosted by Felipe Massa fighting his way to sixth having started from ninth the grid.

The Lotus of Romain Grosjean was eighth ahead of Carlos Sainz Jr, who struggled for straight line speed in his Toro Rosso.

It proved to be another difficult race for McLaren Honda as Fernando Alonso was forced into retirement with brake failure.

The issue came to light in spectacular fashion when the Spaniard struggled to stop in his box for a pit stop causing his mechanics to take evasive action.