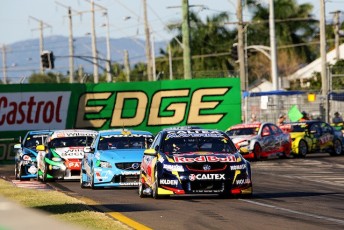 Following on from the announcement last month that The Living End and Birds of Tokyo will perform on Saturday night, the Hilltop Hoods will share the stage with ILLY and The Funkoars.

Australia’s best known stunt performer Matt Mingay is also confirmed as part of the Townsville weekend as he puts his Hot Wheels Trophy Truck on show with his well orchestrated jumps and stunts.

Billed as the largest entertainment package since the event was first run in 2009, the Townsville weekend from July 10-12 will see six national categories on track including the debut of the Australian Formula 4 Championship.

“We promised the biggest and best line-up in the event’s history when we announced The Living End and Birds of Tokyo a fortnight ago and today we delivered on that promise with these three incredibly popular success stories,” V8 Supercars chief executive James Warburton said.

“For just $99 people can see all five fantastic acts across two nights of Rock and Race, all packaged with the high octane action on and off-track. I would easily suggest there is no better value for money at any major sporting and entertainment event in Queensland.”

“Securing world-renowned acts such as the Hilltop Hoods as part of this event is a great incentive for local and international travellers to visit Townsville North Queensland,” Jones said.

“The Palaszczuk Government recognises the importance of major events in driving tourism to the state’s destinations, and a growing tourism industry means jobs for Queenslanders.”