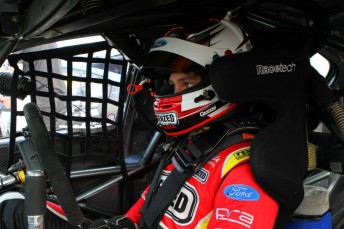 Cameron Waters will join Chaz Mostert for the Enduro Cup

Prodrive Racing Australia has confirmed its three pairings for the Pirtek Enduro Cup.

As expected, the team’s Dunlop Series driver Cameron Waters has been allocated the seat alongside Chaz Mostert.

“To get the call up to the main series again is awesome,” said Waters.

“I really enjoyed working with Jack (Perkins) last year but working with Chaz this year will be an awesome experience.

“He’s the defending Bathurst champion so the pressure is on to back that up but I think we can do it.

“The series will be massive for me, I’ll be in both the Dunlop Series and the main series for the Enduro Cup but I’m really looking forward to it.”

Mostert says he’s excited to be joined by the current leader of the Dunlop Series.

“We already know each other pretty well; he’s a great guy and a great driver so it’s awesome to have him on board,” he said.

“He’s doing really well in the Dunlop Series so that gives me a lot of confidence.

“The FG X will be a bit different compared to what he’s driving at the moment but he’s pretty adaptable and a good driver so I can’t wait to see what we can do.”

This year will meanwhile mark a seventh Prodrive endurance season for Canto and a third for Owen.

The experienced duo will drive their respective mounts in co-driver practice at Winton this Friday, while Waters will concentrate on his Dunlop Series efforts.

“It’ll be great to have Dean and Steve back on board for this year,” said team principal Tim Edwards.

“They’ve worked really well with both Mark and David in the past so it’ll be great to see what they can do again this year.”

Edwards added that Waters’ drive alongside Mostert will be “a fantastic opportunity for Cam to step up again and get a feel for how the main series works and also familiarise himself with the car”.

The Mildura native is looking increasingly likely to move up to the main series next year after four Dunlop Series seasons.