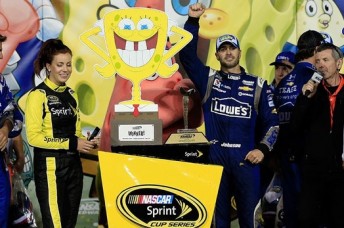 Johnson with the Spongebob Squarepants trophy

Jimmie Johnson has scored his third victory of the NASCAR Sprint Cup season, winning a final dash to the flag at the Spongebob Squarepants 400 at Kansas Speedway.

The result was his 73rd career win, notching up his 200th top 5 and 300th top 10. It marks his third win at Kansas; tying with Jeff Gordon for the most.

Johnson’s race was far from straight forward after he got loose early and despite going sideways he didn’t wreck.

Then a 150-minute rain delay took the race deep into the night with fuel strategy playing a big part.

The race appeared to be between series champion and points’ leader, Kevin Harvick, and Martin Truex Jr. who led the most laps (95) in the race.

However, a caution was called with 11 laps to run when Ricky Stenhouse Jr. found the fence. A range of different strategies came into play, with the key ones being Harvick taking fuel and right-side tyres, Truex Jr. with fuel only and Johnson electing to not come to pit road and re-start off the point.

As the race re-started with six laps to run, Johnson pulled ahead of team-mates Dale Earnhardt Jr. and Jeff Gordon with Harvick in hot pursuit. Truex’s old tyres were no match and he fell back to ninth at the finish.

The time it took for Harvick to pass Gordon and Earnhardt Jr. was critical as he ran out of laps to reel-in Johnson at the finish.

Of the 267 laps in the race, Johnson led just the final 10. Despite the early car handling issues, the rain delay, and running low on fuel, Johnson put the result down to one key ingredient.

“It was a long hard night of racing for track position. Then once we got up front, we were able to hold on there for the final six laps.”

Another solid race for Harvick saw him surpass 1000 race laps led through the first 11 races of the season. The last time a driver has done that was Gordon back in 1995.

He solidified his lead in the standings with his eight finish in the top-2.

Pole man Joey Logano finished in fifth place. This despite two pitlane infractions which meant he had to re-start off the rear of the field. He passed an impressive 55 lead lap cars on the track throughout the race.

Also grabbing attention was 18-year-old Erik Jones. Who substituting for Kyle Busch, ran inside the top-10 for the majority of the race. His good run would come undone late in the race when he lost the rear of his Toyota and slammed the fence.

Next week the NASCAR Sprint Cup has its All-Star weekend at Charlotte Motorspeedway. No championship points are on offer, but that will matter little to the drivers who will race for the US$2 million purse.