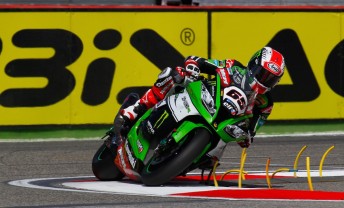 Jonathan Rea continued his domination of the World Superbike Championship by recording his third double win of the season at Imola.

The Kawasaki rider once again showcased his title credentials as he edged team-mate Tom Sykes in both encounters to extend his championship lead to 87 points over Leon Haslam.

Rea faced a stern challenge for victory in a truncated opener which was red flagged following a crash involving David Salom.

Polesitter Davide Giugliano took the fight to Rea and Sykes before the stoppage on lap 11.

Salom was transferred to the circuit’s medical centre where he was diagnosed with a fractured left wrist.

The pair swapped positions in frantic finish which saw Rea cling on to score victory from Sykes with Ducati’s Giugliano in third.

Haslam came home in fourth position for Aprilia ahead of reigning world champion Sylvain Guintoli, who surged from 15th on the grid to finish fifth on the Pata Honda.

After soaking up pressure from Sykes in the early stages, Rea cruised to his eighth victory of the season in the second race.

Sykes was unable to match the pace of his opposite number leaving him to finish a comfortable second, while Jordi Torres secured the final spot on the podium.

Giugliano claimed fourth on his return to the world championship, while BMW’s Ayrton Badovini finished fifth.

Rea’s championship hopes were given a significant boost courtesy of retirements from title rivals Haslam and Ducati rider Chaz Davies.

Haslam crashed on lap nine while Davies suffered a mechanical issue with his Panigale.

The World Superbike Championship heads to Donington Park for round six on May 24.