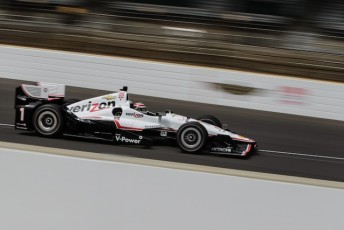 Will Power ignited his IndyCar series claims by becoming the fifth different winner in as many races with a sublime performance in the Angie’s List Grand Prix of Indianapolis.

Controlling the 82-lap race from pole position, Power was able to put together the perfect race as he surged back into calculations in defence of his maiden series title last year.

After leading 65 laps on the 3.9km circuit, Power guided his Penske Chevrolet to a 1.5s win over a resurgent Graham Rahal who emerged as the surprise contender from the Honda-powered brigade.

Rahal’s result was helped when he leap-frogged Simon Pagenaud in the first round of scheduled pit stops to move into second place.

Despite his seemingly invincible position, Power was told to conserve fuel during his last stint.

“That’s the most physical race I think I’ve ever done. It just didn’t stop,” Power said.

The race began under controversial circumstances as the field swept into turn 1 with Castroneves tapping Dixon’s Ganassi machine which triggered a multiple car melee.

Castroneves made a good fist of the recovery to return deep into the top 10, although the Team Penske veteran has now lost valuable ground to Montoya in the points race.

The Brazilian has slipped to third with Power shooting from fifth to second, only five points adrift of Montoya heading into the Indianapolis 500 in two weeks.

Pagenaud was a non-finisher after his team told him to switch to emergency mode on his ECU (Engine Control Unit).

He ultimately rolled into the pits with terminal problems on lap 25 which has seen him slip to 10th in the points standings.