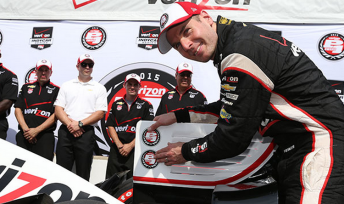 Will Power has secured pole position for the Indy road course race, leading a Chevrolet sweep-out of the top 10

Penske gun Will Power pulled out record laps to claim the top spot in qualifying for the second running of the Angie’s List Grand Prix of Indianapolis.

Scott Dixon (1:09.72s) continued his slick qualifying form to claim his third consecutive front row start in second for Chip Ganassi while Penske’s Helio Castroneves and Juan Montoya are next on the second row.

“To have a pole here at Indianapolis – at this track – is just such a great feeling and I felt like I was strong all week (in three practice sessions),” Power said.

“I just missed out on pole at Barber (Alabama on April 25) so I was pretty determined today and the guys did a great job with the car.”

Simon Pagenaud sees four Penske cars in the top five with Dixon’s team-mate Tony Kanaan to start out of sixth for the 82-lap race.

Earlier Dixon had ensured KV Racing’s Sebastien Bourdais would miss a berth in the Fast Six with the Frenchman to start from seventh.

Power had been dominant from the start of qualifying on his way to eclipsing Pagenaud’s record from last year of 1:09.6716s which he converted to victory in the inaugural race.

Sebastian Saavedra will start from eighth with Luca Filippi and rookie Stefano Coletti completing the top 10.

Jack Hawksworth is the fastest Honda runner and will start from 11th.