Marc Gene has relinquished his driving seat at Nissan

Nissan has reshuffled its Le Mans 24 Hour driver line up following Marc Gene’s decision to stand down from his factory LMP1 drive.

The Spaniard will vacate the #23 GT-R LM entry, he was to share with Max Chilton and Jann Mardenborough, to take up an advisory role with the team at the French endurance classic in June.

Frenchman Olivier Pla will move from the #22 to replace Gene in the #23 entry with Brit Alex Buncombe promoted from Nissan’s #21 third car to fill the void alongside Michael Krumm and Harry Tincknell.

Russian GT Academy winner Mark Shulzhitskiy has been handed the remaining seat in the #21 vacated by Buncombe, where he will combine with Tsugio Matsuda and Lucas Ordonez. 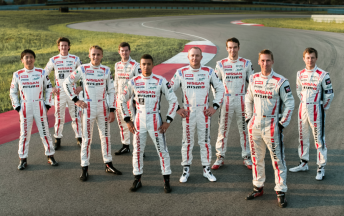 It is not yet clear whether Gene will return to the driving seat for the remaining FIA World Endurance Championship rounds, which may hamper Buncombe’s possible bid to contest the V8 Supercars endurance campaign with Nissan’s Todd Kelly.

“It was a tough decision for me to take a step back for the Le Mans 24 Hours,” said Gene.

“I am so impressed with the efforts being made by the team and even though I won’t race at Le Mans I will be there to help with my knowledge of the great race.

“Nissan is innovating in a big way with the GTR LM. Le Mans is going to be a huge challenge and I think that the best way for me to help the team is by taking on an advisory role.

“I am excited to see from the garage how the car will perform at Le Mans.” 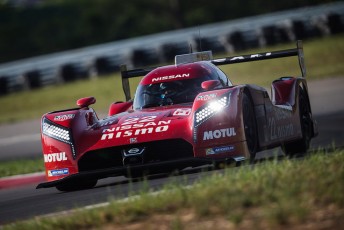 The Nissan GT-R in action during this week’s test

Gene’s move to step away from the driving seat arrives after the completion of Nissan’s final three-day test at the NCM Motorsports Park circuit at Bowling Green, Kentucky.

Tincknell says the team is making steady progress with the GT-R LM but admitted the upcoming Le Mans test day on May 31 will be a challenge for the whole operation.

“It’s great that every test so far has brought progress,” said Tincknell.

“The closer we get to the pace, the harder it is to find time but we continue to improve.

“The next big test for us is the Le Mans test day, which in itself is a huge challenge.

“Le Mans is the hardest race in the world and we want a respectable result. We’ve had delays but we are working hard.

“We go there with our feet on the ground but we will push to get the best result we possibly can.”

The cars will now head to Nissan’s UK base at Silverstone to continue preparations for the GT-R LM’s eagerly awaited Le Mans debut.

Nissan is yet to announce which hybrid class the GT-R will contest at Le Mans.

“Obviously we would like to have more time but we have had three good days of working through a long list of jobs,” said Bowlby.

“Our focus now moves to the re-preparation of these two cars and completing the build of the third.”