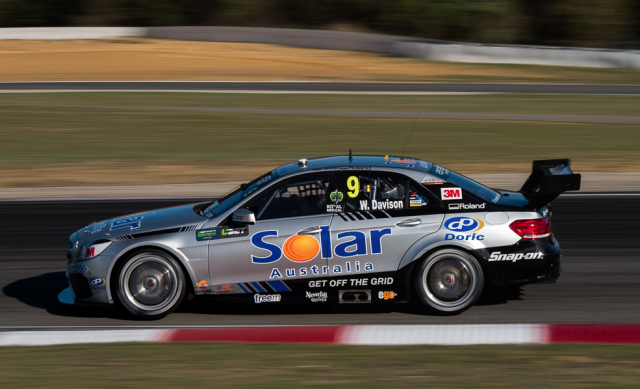 Will Davison scored Erebus’ first win in over 12 months

Will Davison believes that Erebus Motorsport’s quest to become regular front-runners will rely on the team better understanding its current package, rather than rushing new developments.

The 32-year-old scored his first victory with Erebus at Barbagallo last Sunday, capitalising on a well timed Safety Car to carve through to the lead in the closing stages.

The win was the culmination of a promising two events for Davison, who has qualified inside the top 10 for each of the six races across Symmons Plains and Barbagallo.

The team brought a significant engine upgrade package to Symmons Plains and continues to work on a second step, which will be introduced in coming events.

After fluctuating form last season, Davison stresses that gaining a better understanding of its current package will bring opportunities for more wins.

“We need to focus on our human element; working better and understanding our car at every circuit,” Davison told Speedcafe.com.

“We all want free lap time; lighter, more power, everything, but if you don’t have your chassis right you’ll be in the mid-pack.

“When you get everything right on a weekend it looks like you’ve had a big development but you actually haven’t, it’s just that you’ve got the car working.

“That’s what very few teams can do at the moment is get it dialled up every event.

“For us we need to be consistently in that top six or seven where you can jag a few podiums.

“Then you need that final step to be on the front two rows consistently and that’s when you can win more races.”

“It’s questionable as to how much of a gain they’ll make,” Maddison told Speedcafe.com.

“Most of it is things that we’ve wanted to change since the first few months, but now that things have settled with most of the overall package we can start to target those other areas.

“Some of it is centred around reliability and we know there will be a gain in those as well.

“There’s still opportunity in the car in terms of things that the engineers and mechanics want to change to make it sharper again, but arguably when we get it into the sweet spot the car is competitive and can deliver.

“Most of it is knowledge that will bring that consistency.”

Erebus has continued to invest in its Mercedes engine despite all ties with AMG Customer Sports having been cut at the end of last season.

Maddison said that initial spending on the program, which owner Betty Klimenko has previously been quoted as saying cost up to $40 million in its first year, was based on running the cars for at least five seasons.

Such a plan would see the team continuing to run the cars until at least the end of 2017.

“Our return on investment needs to come by running this car and yielding these sorts of results for the next couple of years.”