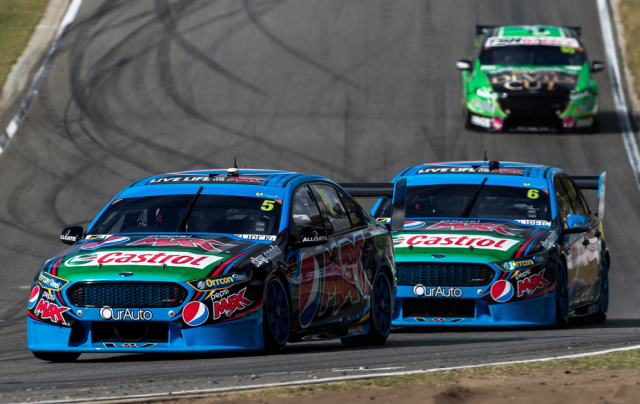 Mark Winterbottom is confident that there’s even more speed to be found in Prodrive’s new FG X Falcon, despite dominating much of the weekend at Barbagallo.

Winterbottom and team-mate Chaz Mostert shared all three pole positions over the weekend, with the former taking a double victory on Saturday.

The team was also in the box seat for a one-two on Sunday before an ill-timed Safety Car curtailed its strategy.

Ominously, Winterbottom says the car is “going to be a lot quicker” if the team can fix an ongoing imbalance that’s causing significant understeer.

The 33-year-old expects that finding a solution “is going to take a bit of geometry change” to the front-end of the cars.

“The biggest improvement we need is still a bit more turn and the guys are working on that,” Winterbottom said in a live video chat after Barbagallo.

“We had good upgrades and good development for the weekend, but for me the turn is still the issue. If we fix that we’re definitely going to go better.

“Everything we do, we can either make the car turn on entry or grip up on exit, but we can’t make it turn in the middle.

“If we can do that we’ll make it drive and the car will be awesome. That’s what we’ll work on.”

Winterbottom is however confident that he and Mostert would have won Sunday’s race “by about 15 seconds” without the intervention of the Safety Car.

The driver admitted that the team, which ran all four of its cars on the riskier soft-hard-soft strategy, should have been more conservative.

“When on the grid the whole field ran hards, we should have probably copied them,” he said.

“There’s no use taking a risk when the whole field is on a different strategy and you’re on pole and know you’re quicker than them.

“That’s the only thing that I think we could have done better.”

Winterbottom slipped to 15th in the closing stages as his tyres faded far quicker than that of team-mate Mostert, who finished fourth.

Now third in the standings after leading on Saturday night, Winterbottom is upbeat on his title prospects.

“If we can be more consistent across every race then we’ve definitely got a good chance,” he said.

“To lead Saturday night was pretty good because we haven’t had the best start.

“We’ve been fifth and fourth and stuff like that, but then two big wins we went straight to the top.

“I think we’ve got a good chance for sure, but we’ve got to minimise (bad results). Fifteenth place, that wrecks you.

“We’ve got to be a bit smarter in those double points races.”