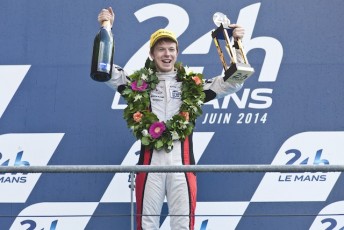 Oliver Turvey has been confirmed to replace Harry Tincknell in the Le Mans 24 Hour. Turvey was part of the squad’s LMP2-winning line up in the marathon last year

Oliver Turvey will substitute for the second successive year in the Kent-based JOTA Sport LMP2 crew at the Le Mans 24 Hour next month.

Turvey comes in to replace Nissan-bound LMP1 recruit Harry Tincknell in the LMP2 team which won the classic last year.

The squad will also go into the twice-around-the-clock endurance epic as last start winners of the LMP2 class at the Spa 6 Hour race last weekend.

Turvey was pitched into the team last year at the last minute when Marc Gene was summoned to the Audi LMP1 team following Loic Duval’s heavy practice shunt on the Wednesday before the race.

The McLaren F1 test and development driver and Japanese Super GT runner will be better prepared this year when he joins the JOTA squad for a test day on May 31 at the La Sarthe circuit.

“Le Mans is a phenomenal race that I fell in love with on my first attempt and one that I want to win outright one day,” Turvey said.

“Last year of course was very special for me, ending up on the top step of the podium after a last-minute call up was an amazing feeling and a great moment in my career.

“This year I’ll have a little more time to prepare and aim for my second win at Le Mans.”

Evans, who had the distinction of claiming an LMP2 victory at his maiden World Endurance Championship start at Spa, is keen to learn from Turvey’s experience at Le Mans.

“I’m sure Oliver will help me along the way and get me up to speed around Le Mans,” Evans said.

“I haven’t raced with or against him before so I am really looking forward to partnering with him for the 24 hours.”

The official test on May 31 will be the last hit-out for squads ahead of the Le Mans marathon from June 13-14.