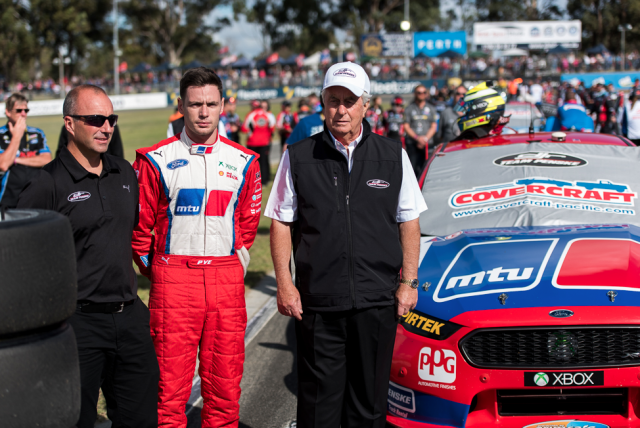 Ambrose, Pye and Penske at Barbagallo

Roger Penske expects to see Marcos Ambrose back on track later this season, but is giving no guarantees as to when the former champion will return.

The weekend’s Barbagallo event saw Penske meet face-to-face with Ambrose and the V8 Supercars team for the first time since the driver stepped down from racing duties in March.

Ambrose’s fill-in Scott Pye has now completed two events aboard the #17 Ford, having taken over the seat on an indefinite basis while the team builds.

The squad had hoped for an uplift in performance at Barbagallo after attempting to more closely align with the cars of technical partner Prodrive, but again found itself at the opposite end of the field.

Although Pye’s performances have proven that Ambrose had not been to blame for early struggles at Adelaide and Albert Park, there are no signs that the two-time champion is planning to return before the Sandown 500.

“I think he’ll be back in the car and if it’s before the enduros, we’ll put him in if there’s a reason to put him in,” Penske told Speedcafe.com.

“I think right now he’s a better tool for us getting the feedback (from Pye). He’s not having to worry about driving.

“He can take the feedback from Scott and we can put that into our computer and determine what we think we need to be doing. He’s been a big help there.”

Penske stressed a need for patience as the team now builds with Pye at the wheel.

“We’re not going to make a big gigantic right or left turn at this point,” he said.

“We’re going to assess the situation and take baby steps or smaller steps to get to the finish line.”

Although acknowledging that V8 Supercars’ tight testing and tyre restrictions have played a big part in his team’s tough run, he refuses to use the situation as an excuse.

“You’ll never hear me say it’s unfair. It’s a process and it’s the rules,” he said.

“(NASCAR founder) Bill France used to say that if you don’t like our rules you don’t have to come and race.

“I think that’s what I’d say with Supercars.”

Penske’s visit to Barbagallo had been long planned in order for him to oversee the roll-out of Penske Corporation company MTU Detroit Diesel as the car’s major sponsor.

The American billionaire says that, in contrast to the on track performance, DJRTP is already kicking goals for his empire off track.

“On one side (commercial) I’m giving myself an A and on the other side (racing) I’m probably trying to get to a C,” he surmised.

CLICK HERE for more with Roger Penske in this week’s Cafe Chat.