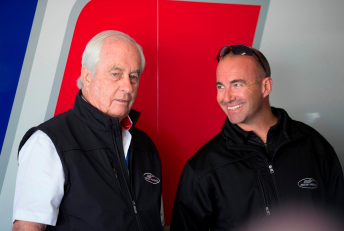 Roger Penske sat down with Speedcafe.com’s Stefan Bartholomaeus at Barbagallo to discuss the way forward for DJR Team Penske.

QUESTION: Roger, a fair bit of water has passed under the bridge since we saw you in Adelaide. A lot has been said and written about this team, but what’s your personal view on how these past two months have unfolded?

ROGER PENSKE: Well I think that if we look at the scoreboard it’s clear that we’re not where we want to be.

I think that coming in with a tool box that’s not very full of data, we see that the limited testing we’ve been able to do and the tyre rules, it makes it much tougher because you’re testing on 18 month old tyres and things like that.

But I certainly don’t want to make that as an excuse. I think that we’ve learned a lot. We’re a third of the way into the season and my expectation is that we’ll move up the grid as we go forward.

We came in and didn’t want to set expectations for anybody that we had the ability to win races. The goal is to win races, we know how to, our team in the States has the same advantage maybe some of the teams racing here have.

They’ve been in the sport and have the knowledge and the people. What we’re trying to do is have our people, our drivers and our car aligned with the product.

There’s two reasons we’re in this. Number one is to win races and have fun. The second thing is to use it as a tool for my business and I would say that the interest level of our customers, I couldn’t ask for more.

All we have to do is meet the expectations of people on the performance side.

SPEEDCAFE: Has this program taken up more of your time and attention personally because of the fact that it hasn’t been a smooth process so far?

The problem is people may relate the success in the other series, but if people came over and got into NASCAR overnight and couldn’t test or have tyres, it’s a tough ladder to climb.

But you’ll never hear me say it’s unfair. It’s a process and it’s the rules. (NASCAR founder) Bill France used to say that if you don’t like our rules you don’t have to come and race. I think that’s what I’d say with Supercars.

We’re excited. I’m amazed at the venues. Adelaide was terrific and coming out here to Western Australia, the interest of the people and the brands and how many people are wearing blue shirts with the Ford logo on them, it’s amazing.

So on one side I’m giving myself an A and on the other side I’m probably trying to get to a C. 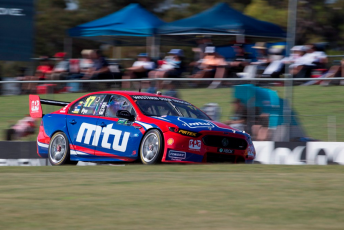 The MTU Ford proved off the pace in Perth

SPEEDCAFE: The V8 Supercar rules are such that a lot of strengths of Team Penske can’t be directly used here, in terms of applying your technology and resources. But is it clear to you the road forward and the changes you’re going to need to make, whether it be structure or personnel or anything like that?

PENSKE: I would say this. I don’t want anyone to think that we can use the fact that we don’t have an opportunity for data (as an excuse).

Tim Edwards and his team from Prodrive have been very helpful to us in giving us direction.

I met with him on Saturday and I would say that we’re not running a second car, a third car or a fourth car. We’re not prepared to at this point.

But because we’re a Ford team there’s been a good alignment there and what we need to do is take the data and understand how to apply it to our car.

SPEEDCAFE: The Marcos Ambrose part of this story has been quite a significant one…

PENSKE: Well you guys always need something to write about, right? (laughs).

SPEEDCAFE: What is the plan now with Marcos?

PENSKE: Well, Marcos decided in his personal life that he wanted to come back home with his kids, which I take my hat off to.

We set a plan out and in any business you set a plan. We didn’t know the cars, he hadn’t driven the cars, so you could almost say we were both rookies.

I think really what we’ve done with Scott coming in is we’re trying to validate. We’re getting the same kind of feedback and now what we’re trying to do is determine what we need to change on our cars.

Is it the way we built the cars? Are there things we can make different when we build the next car? Those are the things that we’re trying to implement.

We’ve got a multi-year deal with Marcos, he’s not going away and I hope to see him back in the car at some point.

SPEEDCAFE: The enduros have been earmarked as the most likely time for that…

PENSKE: I don’t want to speculate on when we will do it.

SPEEDCAFE: But do you expect that eventually he’ll be back racing full-time?

PENSKE: I think he’ll be back in the car and if it’s before the enduros we’ll put him in if there’s a reason to put him in.

I think right now he’s a better tool for us getting the feedback. He’s not having to worry about driving.

He can take the feedback from Scott and we can put that into our computer and determine what we think we need to be doing. He’s been a big help there. 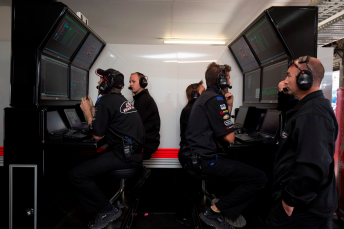 Ambrose watches on in the DJRTP pit bunker

SPEEDCAFE: Is running what we call a wildcard, a second entry, at some point this year still a possibility given what’s gone on since Adelaide?

PENSKE: When I’ve been asked about wildcards I’ve said I’ve got enough wildcards right now and we need to stay focussed on this. We’ll take a look at that at the right time.

SPEEDCAFE: Is there any further clarity on what the program is going to look like next year, whether it be one or two cars full-time?

PENSKE: Like I said earlier, I think we’re through the first 25 percent of the season and it’s too early to make that call.

SPEEDCAFE: Scott Pye has obviously been thrust into the spotlight in all this. The time you spent with him in Adelaide must have, in hindsight, been time well spent.

PENSKE: He’s a bright young man and he’s done a nice job for us. He’s under a lot of pressure as an individual to be jumping in the car and I think he’s handled it very well.

Quite honestly I think the people we have now, we need to support them. Whether it’s Scott, whether it’s Marcos, whether it’s the team. That’s how I run my business.

We’re not going to make a big gigantic right or left turn at this point. We’re going to assess the situation and take baby steps or smaller steps to get to the finish line.

SPEEDCAFE: Is he going to be part of this team going forward beyond this current situation?

PENSKE: Well there are a number of people we could have had drive the car, potentially.

He was part of the team last year and I think represents us how we want as a driver.

We’ll assess our situation and he’ll assess his, because he’s a race driver and he might see somewhere else he wants to go if we can’t give him what he wants.

But I don’t think we’re at that point. It’s unfair to create an environment where he’s worrying about what he’s going to do next year or next week.

Right now he’s part of the team and we’re going to treat him that way.

SPEEDCAFE: From your experience this year, do you see it as important to enter next season with a proven race winning driver as part of the stable?

PENSKE: Well, Marcos Ambrose is a race winning driver (and is under contract for next season).

You could say that, but we’re so far away from it at the moment. Who’s available and who would want to come to us with the performance we have at this point?

We have to assess our own situation. But one thing I will tell you is that we are going to be back next year and we’re going to continue to move forward over the next several months.

I take my hat off to the owners who have developed this series. It’s a great series and the enjoyment and commitment to the brands from the fans, you don’t even see it as much in the States as you do here.

With Ford, Holden and now with the other brands coming in it’s very interesting. We’re completely committed to this on a long term basis. 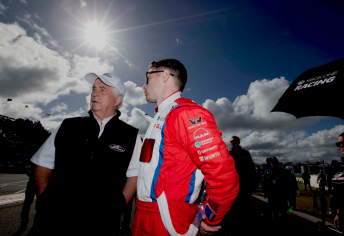 Pye speaks with Penske at Barbagallo

SPEEDCAFE: Are there things that you see here that you can bring back to the United States, be it ideas around promotion and so on?

PENSKE: I think some of the promotion… I saw the number of people at Adelaide and the fan access to the garages and things like this.

It’s a lot like it is in NASCAR. The drivers aren’t like Formula 1 where you can’t get to them. These guys are real athletes, it’s not stick and ball (team) sports.

I just like the series. I like the cars. There’s some value for us from a commercial standpoint and of course we’re racing Fords in the US so to try and extend that relationship out here is important.

SPEEDCAFE: You mentioned earlier how much fan passion you’ve seen for Ford. Does that make it even clearer to you now that Ford needs to be a part of this?

PENSKE: Well one thing I can say is that you’ll see us with Ford. Unless someone came with a very interesting proposition, our best decision is to stay focussed on what we have.

We could always use more support (from the factory), but right now I think Ford is making its own decisions, as other manufacturers are in Australia, about what’s going to be the focus in terms of manufacturing, distribution, retail, and then of course the marketing that surrounds that is something that we’ll all have to look at.

SPEEDCAFE: If you and Prodrive both stick with the Ford product, are you planning to continue to be effectively a customer team? Or is the end goal to be a self sufficient operation?

PENSKE: I don’t know that. It’s too early to call. We have a technical agreement with them where they supply us certain information and we think it’s high integrity the way it’s being handled.

They’ve been very helpful and that’s the model we set up at the beginning of the season.

I think we can do some things together to make us all better, from the standpoint of rather than spending money in two different pockets, we can go together and combine some costs on things that’ll make our cars better.