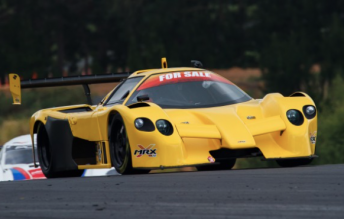 A limited number of Saker SV1 lightweight sportscars, originally designed and built by Bruce Turnbull in New Zealand, were produced from 1992-1995.

Having been raced in New Zealand’s Super Sedan Series by Alan Duncan, this SV1 has undergone a rebuild which has taken six years to complete.

The original Saker chassis has had extensive modifications, while the bodywork has been altered with a newly constructed front end.

MRX has completely re-built a five litre Chevrolet V8 engine, which was transplanted into the car by its previous owner. The unit is capable of producing 550 plus horse power.

The SV1 has been prepared to race in New Zealand’s GT1 and GT2 series but could compete in the Australian Kerrick Sports Sedan series.

The car completed a demonstration run at Hampton Downs in November last year.

For the chance to purchase this rare sportscar and much more, simply click here and register for free.