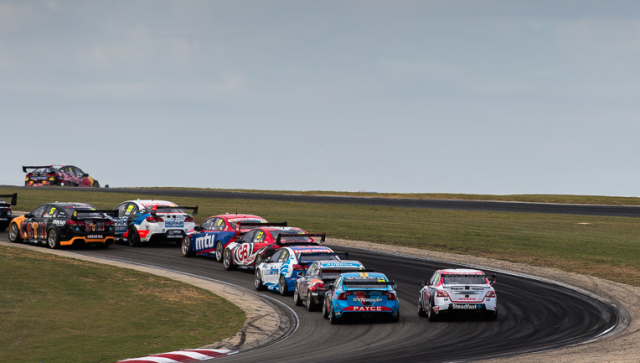 V8 Supercars has launched an early season review of its Super Sprint format, with a shake-up of the Saturday program to be made as soon as the next event.

A category spokesman has confirmed to Speedcafe.com that a proposal to merge the two 60km heats into a single, 120km race will soon be put to the V8 Supercars Commission.

The Saturday races had been trimmed from 100km to 60km this year in a move that was billed as “guaranteed to produce action-packed racing”.

The four 60km encounters run across Symmons Plains and Barbagallo have however been distinctly devoid of action among the front-runners.

A combined total of just two top five passes have been made after the opening lap in the four sprint races held to date, with the top two running unchanged on each occasion.

“He will put a case to the Commission to go to potentially a 120km race with one stop for tyres.

“We’re looking at the possibility of doing that for Winton.”

The tyre allocations are also officially under review in a separate process which was started prior to Barbagallo.

The total tyre allocation for the race meetings was this year slashed from 380 tyres to 292 as part of a push to save costs for teams.

The need to save tyres from Saturday to re-use on Sunday and the lack of quality pre-marked tyre to use in practice have both been heavily criticised by drivers.

No changes are however expected to be made on the tyre front until later in the season due to Dunlop production considerations.