Long debrief for Whincup after Barbagallo

Long debrief for Whincup after Barbagallo 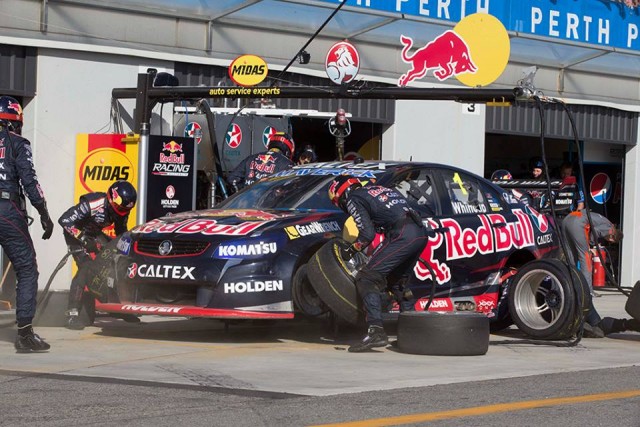 Jamie Whincup expects a long debrief at Red Bull Racing Australia this week after a poor showing for the six-time champion at Barbagallo.

Whincup fell from the lead to fifth in the standings over the weekend, finishing 15th, second and 19th in the respective races.

Uncharacteristic mistakes in Race 7 qualifying, where he ran wide on his fastest lap, and early in Race 9, where he went off at Turn 6, both proved costly.

The Red Bull Holden also notably lacked pace on the hard tyre – leading the driver to label Saturday’s podium as “almost embarrassing” – and longevity on the soft.

Team-mate Craig Lowndes was however able to make a better fist of the tricky Perth venue, scoring a trio of top five results to arrest the points lead.

“Well that didn’t exactly go to plan,” Whincup wrote on his website of the weekend.

“Although we left Tassie some five weeks ago knowing we had some areas to improve on, unfortunately that work sheet just got a little longer.”

Whincup was quick to own up to his Race 9 mistake, which saw him slip from fifth to last on just the third lap.

“I was probably pushing a little bit too hard for the car I had and was just trying to stay up there in the early stages but ended up locking a front wheel and plowing the sand trap,” he said.

Adding insult to injury was the fact that the #1 Holden was later trapped a lap down during the Safety Car-induced flurry of second pitstops.

“We are yet to investigate what happened so I won’t point the finger at anyone for now,” he said.

“It was a pity because the car was really good for the last stint on the soft tyres but once again didn’t have good tyre life.

“As usual we head back to the workshop this week and I’m suspecting it’s going to be a long debrief as we put our heads together to work towards Winton.”

Winton has been a particularly difficult venue for Red Bull since the current cars were introduced in 2013, yielding Whincup a best finish of just ninth from six races.