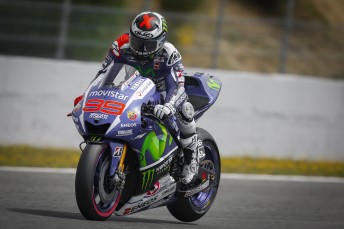 The former double world champion set a session best of 1:38.516s to head a Yamaha one-two at the venue with Lorenzo pipping championship leader and team-mate Valentino Rossi by 0.042s.

Yamaha ran its machines without any new updates with both Lorenzo and Rossi focussing on bike set up during lengthy runs of 52 and 66 laps respectively.

Suzuki appeared to have made up some ground as they continued to work on a chatter issue with Aleix Espargaro fourth and Maverick Vinales ninth.

Reigning world champion Marc Marquez completed only four laps as Honda as he tried a new swingarm on the Honda.

The Spaniard, riding with a broken finger, was fifth fastest just 0.4s off the pace.

Stand in team-mate Hiroshi Aoyama was a lowly 19th having recorded 60 laps aboard the Honda RC213V.

Australia’s Jack Miller continued his progress on the open class LCR Honda to finish 17th fastest having racked up 64 laps.

“I’m reasonably happy with today, there’s always a lot of work to do during testing,” said Miller.

“We’ve come up with a decent set-up, one with which we could ride consistently at our fastest lap time of the weekend. That’s a real bonus because as well as the team learning a lot, I also did.

“We can think of this test as being positive and we will take a lot from it. I now feel a lot more ready to travel to Le Mans than if we had just packed up and left after Sunday’s race.

“It’s definitely been a good test all round.”