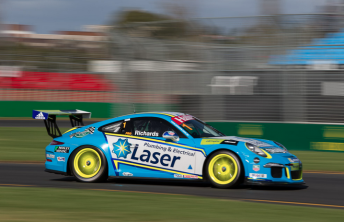 The field for Carrera Cup Australia’s Phillip Island Pro-Am continues to take shape with the category’s front-runners confirming their co-drivers.

The selections follow a review of the co-driver system since last year’s event, resulting in the introduction of a set of guidelines aimed at ensuring only true amateur drivers fill the slots.

While previously under the sole discretion of Porsche, Am rated co-drivers must now be 36 or older and not have finished in the top three of a CAMS national championship or selected series.

The changes are designed to ensure a level playing field for the full-time Amateurs, who each select a Pro to team with for Phillip Island.

As previously reported, V8 Supercars stars Tim Slade, Nick Percat and Scott McLaughlin are all set to return to the event as invited Pros, while German GT ace Christopher Mies will take part for the first time.

“This round usually throws a curve ball at the championship standings so I’ll plan to stay out of trouble and focus on retaining the vital championship lead by the end of the weekend,” he said.

“I’ve known Dean since he first started racing cars and he’s always dedicated a vast amount of time and energy to being successful.

“We’ll be out to have a good time driving together and finish both races; simple as that.”