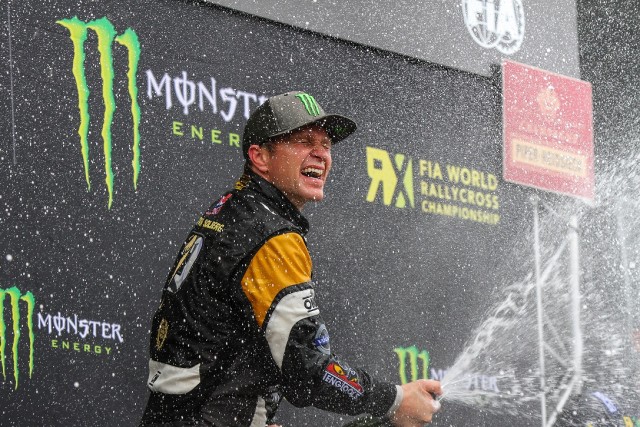 Running on the same program as the DTM series, the Rallycross component of the weekend was staged on the inside of the Sachs Arena.

“The fans seemed to love rallycross and it’s been great to be in Hockenheim alongside DTM this weekend, it’s been very well organised,” Solberg said.

“It’s not been an easy weekend. We had a bad start on Friday, there was little grip off the line and then I had a puncture in the semi-final.

SDRX lead Ford Olsbergs MSE in the teams’ championship by three points and have a total of 74 points.

The championship heads to Mettet, Belgium, for round 2 from May 23-24. 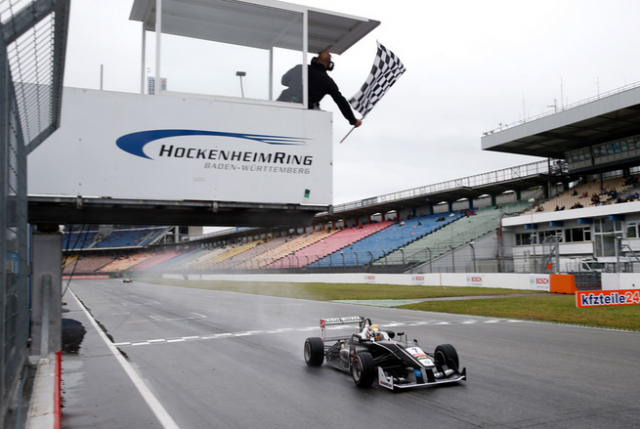 Van Amersfoort Racing driver Charles Leclerc survived a wet race to score his second win of the season in the final heat at Hockenheim.

Prema Powerteam star Felix Rosenqvist finished second ahead of Antonio Giovinazzi (Jagonya Ayam with Carlin) who managed to defend his lead in the championship.

Leclerc is now five points behind Giovinazzi on the ladder with the next round scheduled for Pau from May 15-17. Norbert Michelisz on his way to home victory in Hungary

Norbert Michelisz scored a popular victory in front of his home crowd in Hungary to break Citroen’s stranglehold of the World Touring Car Championship.

The Honda driver produced a lights-to-flag victory in the reverse grid Race 2 to chalk up the Japanese manufacturer’s first win of the season.

Michelisz made no mistakes in converting his pole position into the lead as the Hungarian breezed into the lead on the run to Turn 1.

The privateer racer was never troubled as he took the win comfortably from the ROAL Chevrolet’s of Tom Coronel and Tom Chilton.

The works Honda of Tiago Monteiro was fourth ahead of the Citroen trio of Sebastien Loeb, reigning world champion Jose Maria Lopez and Yvan Muller.

Race 1 saw a much more familiar pattern with Lopez guiding his Citroen to victory with an impressive drive from the second row.

Muller, who appeared to have caused a false start which required an additional formation lap, finished second with the Campos Racing Chevrolet of Hugo Valente in third.

Lopez continues to lead the championship with a 34 point margin over team-mate Loeb ahead of round 3 at Germany’s Nurburgring Nordschleife on May 16. Audi emerged as the dominant force in DTM with Jamie Green and Mattias Ekstrom sharing the spoils as the championship kicked off the season with its new two race format.

The British driver produced a masterful drive in the season opener to guide his Audi from pole to a comfortable win, which was Green’s first since the Norisring in 2012.

Green had to survive two Safety Car periods before taking the chequered flag with a 2.4s advantage over the Mercedes pair of Pascal Wehrlein and and former champion Paul Di Resta.

Ekstrom demonstrated his wet weather driving skills in the second race with an impressive drive to victory.

The two-time champion quickly shot to the lead on the opening lap after overtaking Marco Wittmann at the hairpin.

Once in front, Ekstrom seemed in control until rain started to fall which eventually forced the field to come in wet tyres .

The Swede lost the lead initially to Edoardo Mortara, who had pitted a lap earlier.

However, Ekstrom made light work of his team-mate and once back in the lead he cruised to victory.

Mortara, who leads the championship, held onto second while Gary Paffett claimed the final place on the podium in third.

The championship heads to the Lausitzring on May 30-31. The #1 Nissan took victory in the second round of SuperGT

Nissan completed a clean sweep at the second round of Super GT with victories in both the GT500 and GT300 classes at Fuji.

Tsugio Matsuda and Ronnie Quintarelli converted pole position into a dominant race victory in the 500km race finishing ahead of a sister GT-R driven by Hironobu Yasuda and J.P.L.De Oliveira.

The Daisuke Ito and James Rossiter TOM’S Lexus secured the final place on the podium in third.

“Yesterday I boasted that ‘lights-to-flag victories are NISMO’s style,’ and being able to live up to that claim makes me incredibly happy,” said Nissan Team Principal Yutaka Suzuki.

“We have managed to do it (lights-to-flag victories) three times now, from Autopolis and Motegi last year, to this time now. It’s a huge boost of confidence. From the staff to the drivers, everyone did a perfect job.”