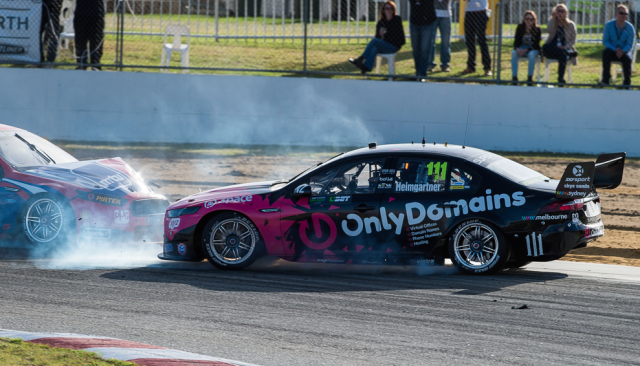 Pye has been penalised for punting Heimgartner

Scott Pye and Michael Caruso have both been given points penalties for careless driving in the closing stages of Race 9 at Barbagallo.

Pye has been deducted 25 points following contact with Andre Heimgartner at Turn 1 on lap 79.

The incident, which Pye felt occurred due to a mechanical problem with the DJR Team Penske Ford, put both cars out of the race.

The penalty drops Pye to the bottom of the standings, now with less points from two events than Marcos Ambrose scored in Adelaide.

Nissan driver Caruso has meanwhile lost 15 points for contact with Lee Holdsworth at Turn 7 on lap 74.

Caruso tapped Holdsworth wide to take 12th position as the pair battled behind Mark Winterbottom, who was dropping backwards through the field on his worn tyres.

The factory Altima driver finished 10th in the race and remains 21st in the standings having also earned a points penalty in the Adelaide season opener.