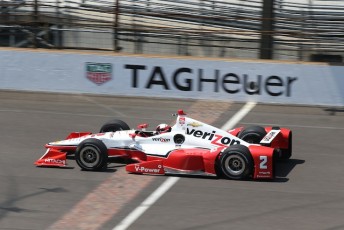 Ahead of opening practice for the May 24 Indy 500 starting today week, the new-for-2015 high speed oval bodykits from Honda and Chevrolet were put through their paces at the 4km oval.

The speeds have risen markedly with the lower downforce kits with 21 of the 27 drivers eclipsing opening day practice of 223.057mph (358.975km/h) set by Will Power last year.

Second fastest in the tests was Helio Castroneves ahead of Marco Andretti, the fastest Honda-powered driver.

Chip Ganassi flyer Scott Dixon was fourth and Simon Pagenaud was fifth and the third Penske driver in the top five.

Will Power was 14th fastest after turning a total of 93 laps for the day.

Honda and Chevrolet-powered teams can assess multiple options with their new bodykits during practice and qualifying ahead of the Indy 500.

The big build-up to the 200-lap race at The Brickyard will come immediately after the next round of the series at the Indianapolis road course this weekend.

See below for full test times and speeds