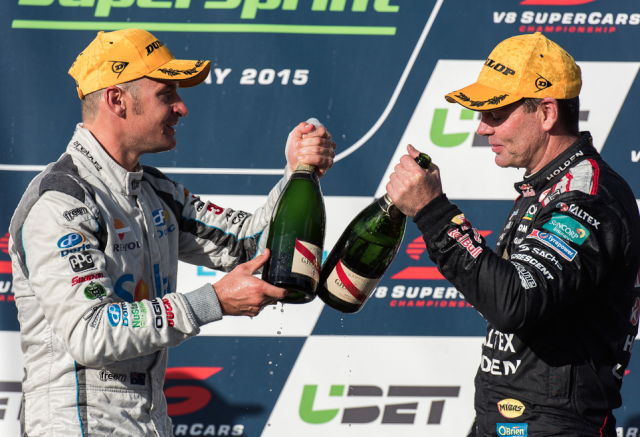 New V8 Supercars Championship leader Craig Lowndes says he left Barbagallo encouraged by his form, despite narrowly missing out on a much hyped 100th win.

Lowndes appeared set to break through the milestone when a Safety Car played perfectly into his tyre strategy, blazing past the previously dominant Prodrive Fords at the start of the final stint.

Fading tyres on the Red Bull Holden, however, ensured that second place man Will Davison was able to close down and pass Lowndes over the final laps, creating an upset result.

The upside for Lowndes is that he now leads the championship standings by 52 points thanks to his consistent performances across Adelaide, Symmons Plains and Barbagallo.

Jamie Whincup and Mark Winterbottom, who had both taken turns leading the standings throughout the weekend, had shocking Sundays, finishing 19th and 15th respectively.

Whincup never recovered from an early off track excursion, while Saturday’s double winner Winterbottom plummeted down the order in the closing stages after his strategy failed to pay off.

“There’s no doubt that the consistency needs to be there throughout the year,” said Lowndes who like his closest challenger James Courtney, has finished every race this season in the top 10.

“It’s all about consistency and if you can’t win races you want to score points.

“It’s no secret that at the end of the year the champion that stands up will be the most consistent one, whether you win races or not.

“I would have loved to have scored the 100th, it would have been fitting being here two years after getting the 91 (breaking the previous win record), but it wasn’t to be.”

Hype over the milestone was at fever pitch in the lead-up to the weekend thanks in part to Lowndes’ strong record at Barbagallo.

Lowndes however says it was no surprise to see the Prodrive Fords set the pace.

“We knew that the Prodrive guys would be fast here this weekend,” he said.

“They were quick at the grand prix and we think they’ll be quick at any of the flowing circuits, so we’ve got to lift a little bit.

“Fabian (Coulthard) did a fantastic job in Race 2 and put some pressure on Jamie and I’m sure that if he got passed Jamie he could have matched the front two guys.

“We know that the speed is in the Commodore, we’ve just got to get it out of it.”