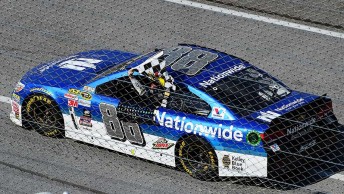 Dale Earnhardt Jr. kept his car at the front of the pack for the final half of the race to hold-off team-mate Jimmie Johnson to win at Talladega Superspeedway.

At a race track where drafting is usually everything, Earnhardt Jr. was so fast that no one seemed keen to move out of line behind him.

It was only on the final lap that Johnson looked to the inside, but quickly jumped back behind as NASCAR’s most popular driver sailed through to victory. Less than a week after what would have been his late father’s 64th birthday, it was a clearly emotional Earnhardt Jr. during his victory lap and post-race celebrations.

It was Earnhardt’s first win at Talladega since 2004 and is his sixth overall at the 2.66-mile track, tying him with Jeff Gordon for most wins by an active driver there.

Importantly it was Earnhardt Jr.’s first win of the season and all but secures his position in the Chase for the Sprint Cup.

Even with a front grill full of debris and his water temperature rising, Earnhardt Jr. led the most laps (67), followed by Johnson (50 laps) and pole-sitter Jeff Gordon (31 laps). Gordon’s race finished with him involved in a final lap crash and he finished 31st.

Another good run came from Sam Hornish Jr., who scored his best result since taking over from Marcos Ambrose to finish in sixth.

The only major incident occurred on lap #47 when a number of cars were involved in a back-stretch crash which involved amongst others Trevor Bayne, Joey Logano, Greg Biffle, Kyle Larson and David Ragan.