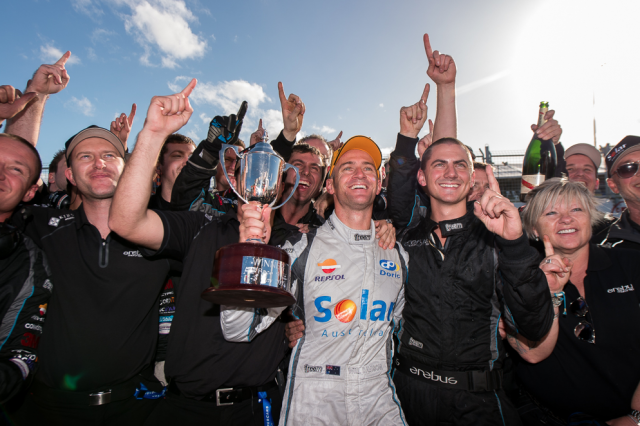 Davison celebrates with the Erebus team

Fresh from a surprise victory at Barbagallo, Will Davison has firmly ruled himself out of the growing 2016 silly season, declaring he is “fully committed” to continuing at Erebus.

The switch brought with it a distinct downturn in results for the driver who, after proving a victor in all but one season from 2008 to 2013, finished a winless 14th in the championship last year.

While Davison admitted after Sunday’s success that he had at times doubted when he would win again, he has categorically ruled out searching for greener pastures elsewhere.

Paddock discussion over 2016 driver movements was in full swing at Barbagallo, with the vacancy at Tekno Autosports created by the impending exit of Shane van Gisbergen a particularly hot topic.

Davison says he’ll happily leave the silly season to those who are off-contract, which includes the likes of David Reynolds, Fabian Coulthard and James Moffat.

“I’ve got a long contract here and am fully focussed on making it work,” Davison told Speedcafe.com.

“You can’t think about anything else. I threw myself into this and we’ve got to make it work.

“I’ve changed teams before but they’ve all been at the end of contracts and people don’t really know the reasons for them (moving).

“I never chopped and changed for the fun of it. That’s the last thing you want to do.

“You want to build a team around you and we’re in the building phase here.

“I made a big call coming here and I knew it wasn’t going to be easy straight away but we’re in the building phase.

“This (winning at Barbagallo) is a big part of that phase and we’ve got to keep building. I’m fully committed to making this work.”

After messy exits from the two factory squads, Davison says he is revelling in the underdog environment at Erebus.

Although well funded through owner Betty Klimenko, the squad now runs without any official tie-up with Mercedes or AMG and is fighting to be a consistent challenger with its E63 package.

“I enjoyed my time in the big teams, it was awesome, but the pressure is on and when you have seconds and thirds people are disappointed,” reflected Davison.

“That’s natural, you’ve got to win, but at the end of the day people get lost in what the sport is all about. It’s not just a job.

“To really be a part of it and feel progression (at Erebus), it’s cool.

“Seeing where these cars were a year or so ago, for me to bring this to them… I’m not going to say that it’s my best win, but in it’s own way it is.

“Now I’ve won at every single team I’ve been in and I’m proud of that. This was the most challenging one and I didn’t want to be shy of a challenge.

“Now we’ve got to keep it up. We’ve got lots of work ahead of us, but the thing that makes me happy now is progression and consistency.

“We need more outright speed, we know that, but we knew here that we had mega tyre life.”