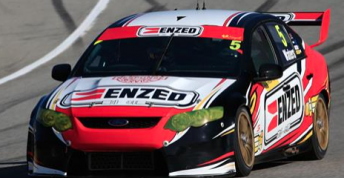 Cameron Waters completed his domination of the 100th Dunlop Series round with a clean sweep of race wins at Barbagallo Raceway.

The 20-year-old completed a second lights-to-flag victory as he took advantage of squabbles for position down the field to open up an unassailable lead which he measured brilliantly to the chequered flag.

Such was Waters pace, he finished the race with a sizeable 16.4s margin to reigning champion Paul Dumbrell, who produced a storming drive from 10th on the grid to finish second.

“It has been an awesome weekend, the car has been mega,” said Waters.

“I don’t now what happened to the other two I couldn’t see them.

“To win the 100th round is pretty cool as well and I can’t thank the team enough.”

The battle for third position raged throughout the 28 lap encounter but it was Andrew Jones who snared the place with a remarkable effort from the back of the grid.

Jones made rapid progress through the race before he caught Chris Pither and Jack Le Brocq in the closing stages.

With Le Brocq and Pither struggling for grip, Jones dispatched the pair to secure a much deserved third place.

Le Brocq managed to bring his Matt White Motorsport entry home in fourth just ahead of Macauley Jones, who starred in the Brad Jones Racing Commodore.

Pither become involved in a battle with Paul Morris in the final laps which resulted in him being tapped into the gravel trap at Turn 1.

Rookie Bryce Fulwood enjoyed another strong showing with the 16-year-old ending his weekend on a high in 12th spot.