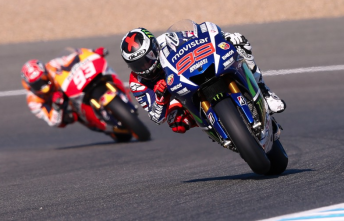 Jorge Lorenzo on his way to victory in Jerez

The factory Yamaha rider was untouchable in front of a 120,000 home crowd at the tight and twisty Jerez circuit as he cruised to a commanding first win of the 2015 season.

Marc Marquez, riding with a broken finger, managed to hold on to finish second with championship leader Valentino Rossi in third.

Polesitter Lorenzo progressively opened up a gap over Honda’s Marquez in second as the top two quickly moved away from the field.

Marquez was unable to stay on the back of the Yamaha but as the laps ticked by it was the other Yamaha of Rossi, which focussed his attention.

After passing Tech 3 Yamaha’s Pol Espargaro for third in the opening laps, Rossi set his sights on Marquez.

However, closing the gap proved a difficult prospect with Rossi only able to mount a charge in the final 10 laps.

The nine-time world champion did manage to close to within two seconds of the Spaniard, but in the end he had to settle for third and his 200th MotoGP podium finish.

The third place finish has seen Rossi increase his championship lead over Andrea Dovizioso to 15 points with Lorenzo now in third.

LCR Honda’s Cal Crutchlow came home in fourth after another strong performance from the Brit ahead of Pol Espargaro.

Ducati’s Andrea Iannone managed to salvage sixth after a disastrous start thats saw him drop to as low as 12th from third on the grid.

Aleix Espargaro was the top Suzuki in seventh, while Bradley Smith, Dovizioso and Yonny Hernandez completed the top 10.

Australia’s Jack Miller couldn’t extend his run of points finishes in 20th position despite having run as a high as 15th in the early stages of the race.

“It wasn’t a great race at all,”said Miller.

“We tried really hard, but towards the middle of the race I ran wide and lost the group. I pushed really hard to try and catch them up, but it was not enough.

“I had too many bad moments and decided if I kept on pushing like that I would end up crashing. So we finished the race, but not in the position I wanted. I hope in the tests on Monday we can find something positive for the races ahead.”