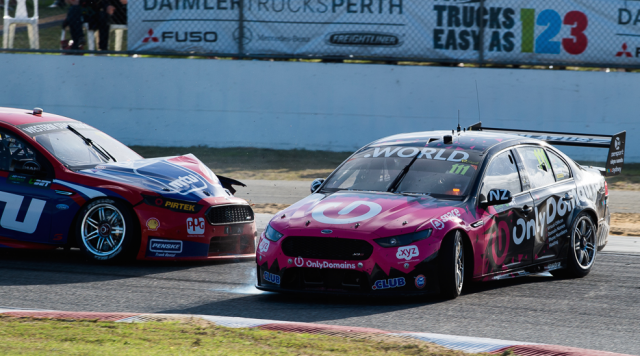 Pye and Heimgartner collided in the closing stages

A tough weekend for Scott Pye and DJR Team Penske at Barbagallo ended when a suspected mechanical issue caused a crash with Andre Heimgartner.

The two Ford drivers had been struggling home on well used soft tyres when they collided while disputing 19th place with five laps remaining.

A locked up Pye drilled the right-rear of the Kiwi’s Prodrive-run entry, spinning both into the Turn 1 gravel trap.

Pye later reported that he suspected a problem with the car after one of his front brake lock warning lights stayed on even after he had released the pedal.

“I really don’t know what happened to put us out, but the inside front wheel locked and we just didn’t decelerate at all,” he lamented.

Pye had been on the same soft-hard-soft strategy as all four Prodrive entries, which was effectively destroyed by the mid-race Safety Car.

“Unfortunately the Safety Car was a bit early for us, but we had to pit,” he said.

“The car just wasn’t the same (in the last stint). We had a great race car in the first stint and really came through the field quite comfortably.

“The pace on the hard tyre wasn’t too bad either. We were still lacking a bit but it was better than Saturday.

“The Safety Car came out with 33 laps to go and we were in P11. I really thought that the soft tyre would hang on better but we really struggled for pace.”

Pye had earlier languished in 21st and 22nd in the two Saturday races as the team’s rough start to the year continued.

Having entered the event optimistic following a positive test at Queensland Raceway, the #17 Ford lacked pace all weekend.

The poor results came in front of the team’s high profile visitors from the United States, including majority owner Roger Penske.

“It was an extremely challenging weekend for us,” said DJR Team Penske managing director Ryan Story.

“We were pleased that we made a little bit of progress today and we need to keep heading in that direction.

“But clearly there is quite a bit of work left to do for us.”

Pye and Marcos Ambrose will return to the circuit for a ride day tomorrow, using one of the squad’s spare cars. 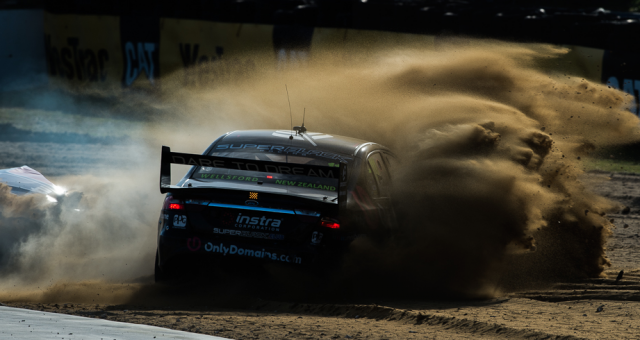 Both cars ended their day in the sand