Measured Waters marches on at Barbagallo

Measured Waters marches on at Barbagallo 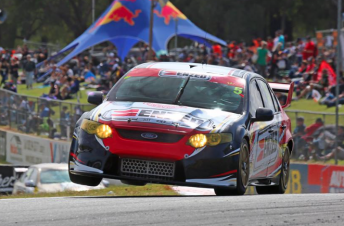 Cameron Waters completed a dominant lights-to-flag victory in the second Dunlop Series heat to open up a healthy lead in the championship at Barbagallo.

The Prodrive Racing Australia driver proved untouchable with an impressive measured drive on worn tyres at the Perth circuit.

There was plenty of action right through the field with the podium places only decided in the final laps.

Le Brocq and Pither fought over second for the entire race, but a mistake from the former at Turn 6 with just two laps remaining gifted Pither the position.

Waters’ victory could emerge to be a pivotal point in the championship with series co-leader heading into this weekend, Paul Dumbrell, forced to nurse his Eggleston Motorsport Commodore home in 10th position.

Dumbrell appeared to be battling with an engine issue having dropped down the order in the early stages.

There was plenty of action throughout the race for the minor positions as Todd Hazelwood fought his way through the field to finish fourth.

Experienced V8 Supercar driver Paul Morris was in the thick of the battles at the start which resulted in a fifth place at the flag. Garry Rogers Motorsport driver James Golding was sixth.

It was a difficult race for star of race 1 Arren Russell, who ran as high as third in the opening laps.

He soon dropped down the order before contact with Shae Davies saw him suffer damage and finish in 23rd spot.

Andrew Jones retired after just two laps with a reoccurrence of an oil pressure issue.