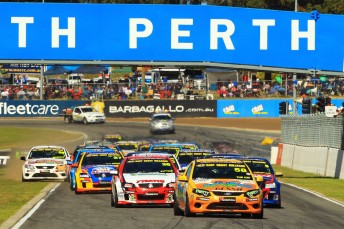 Ryal Harris takes the lead at the start of Race 3

A strong start from the Gold Coast driver set up the victory as he won the drag race with polesitter Rhys McNally on the run to the first corner.

Harris spent the majority of the race looking in his mirrors defending from a hard charging Marjoram searching for his breakthrough win.

Despite coming under constant pressure, the former two-time V8 Utes champion hung on to take the chequered flag, although he did have a brief heart in the mouth moment while lapping Warwick Spooner on the final lap.

“I’m really happy and although I don’t entirely agree with the new points system it definitely made the final race interesting, any one of six people could have won and I’m glad it was me,” said Harris.

Marjoram trailed Harris by 0.2s at the flags as the Western Australian secure his maiden Utes podium in front of his home crowd.

The Erebus driver managed to force his way by a struggling McNally and a fast starting Gerard McLeod, who eventually came home in fourth after losing out to George Miedecke on the final lap.

“I couldn’t be happier, to finally get a podium and to do it here in front of a home crowd and all of the Auto One crew it’s just awesome,” said Marjoram.

“I’m so happy right now, Erebus have done such a great job on the car and I know I’m one to watch out for now.”

McNally was hit with a 10 second penalty for kerb striking which dropped him to 11th position.

Harris now leads the championship standings by 28 points from Marjoram with Miedecke jumping up to third.