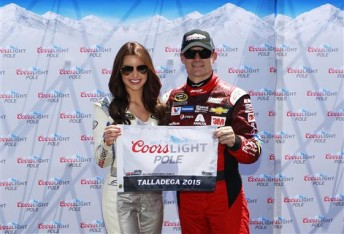 Jeff Gordon racked-up his 80th pole with the fastest time ahead of the Geico 500 at NASCAR’s biggest track – Talladega Superspeedway.

In a race where drafting will be everything, Gordon will have plenty of friends around him with four Hendrick Motorsports cars in the top-5.

Despite this being Gordon’s final season as a fulltime driver, his speed of 313.489 km/h (194.793 mph) on the 2.66-mile track was enough to give him his third pole of the season and fourth at Talladega. The speed of Gordon’s Chevrolet gave him an impressive margin of 0.281 seconds.

“We definitely have a fast Drive To End Hunger Chevrolet,” said Gordon.

“I think we’ve shown that all weekend long. But you never know what you’ve got until you put it on the clock. I am so proud of this pole because we got the pole in Daytona, but it was a totally different format.

“I knew the car was fast there. For this team to bring another car, a different car here, and all the hard work from the engine shop and what they do with the bodies, and chassis and prep. A lot of hard work goes into this and (crew chief) Alan Gustafson takes a lot of pride in these. They should, this is awesome.”

“And awesome for Hendrick Motorsports to be on the front row. This was all them. I played a small role at Daytona, but I played no role today, but it was fun.”

Outside of Talladega and Daytona, all other tracks use elimination styled qualifying similar to Formula 1. However, with pack-drafting causing a number of incidents at the two superspeedways, this weekend’s race at Talladega saw qualifying return to single car runs. The same system will be used in the July race at Daytona.

Some notable performances in qualifying saw Michael Waltrip; who nowadays only races at the superspeedways, qualify in 23rd. While defending Sprint Cup Series champion and current points leader Kevin Harvick was 24th.

Michael McDowell and rookie Jeb Burton failed to qualify for the 43-car field.