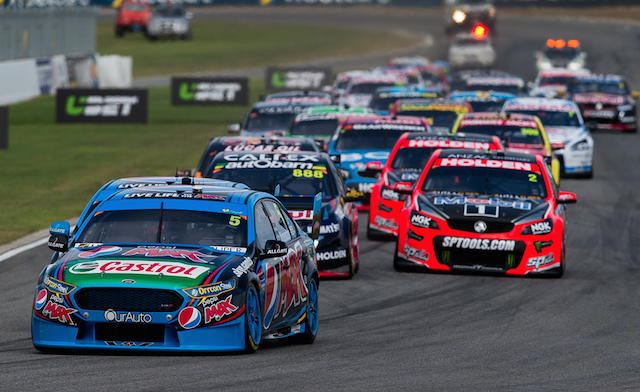 V8 Supercars Commission member Tim Edwards believes that the much maligned tyre restrictions will be vindicated today as strategy promises to spice up the action.

The off-season tyre allocation cull has come under an increasingly intense spotlight this weekend due to the high degradation levels seen on the unique Barbagallo track surface.

Saturday’s two 60km heats were largely uneventful affairs as drivers focussed on managing their tyres to the end of each encounter.

Today’s 200km finale however promises an intriguing strategic battle as teams juggle a new set of softs with the remainder of their weekend allotment of three sets of hards.

With the 120 litre fuel drop necessitating a two-stop, three stint race, the vast majority of teams will have to put on used tyres at some point in the race.

Although the tyre allocation cut was made largely in the name of trimming cost out of the category for teams, Commission member and Prodrive boss Edwards is adamant that it also adds to the show.

“Every driver and every engineer is racking their brains as to what the best way to approach the race is,” Edwards told Speedcafe.com.

“It’s not going to work for everybody and some are going to get caught out. It’s perfect, really.

“The fact that we have got that amount of tyres tomorrow means that everybody is going to be working hard; drivers, engineers, everyone.

“It’s what you want. If everyone had three sets of new tyres, where’s the strategy?”

Edwards believes that running a short stint on the softs, a long stint on new hards and then re-using the softs for the run home will be the most popular option.

Others have suggested that two stints on hards – which will need to combine both new and used tyres – before finishing on new softs will be the better way to go due to the high degradation of the softs.

Saturday’s races proved that the tyre degradation is even higher than last year, with the leaders losing two seconds per lap from their early pace by the end of the 25 lap heats.

Further deterioration of the track surface and the introduction of a 17psi minimum tyre pressure late last year are both thought to be behind the added wear.

The softs are expected to last less than 30 of the 83 laps; although their life will likely be better in the latter stages as the track grip improves with more rubber on it.

Shane van Gisbergen is arguably in the box seat for a strong result having saved a complete set of hards on Saturday by re-using his Race 7 set in Race 8.

The Tekno team had elected to sacrifice Race 8, for which the Kiwi had qualified 18th, after seeing Jamie Whincup struggle to make ground from deep in the pack in Race 7.

“The Saturday races are worth nothing and Sunday is the money day,” noted Van Gisbergen, referring to the double-points awarded for the longer finale.

Several others are understood to have re-used at least two tyres in the second heat, ensuring they’ll be marginally better placed than rivals who used two complete sets.

A third strategy of running hard-soft-hard may also be employed by teams struggling to stay on the lead lap at the end of their first stints around the relatively short venue.

Weather and Safety Cars meanwhile loom as two major variables, with a “very high chance of showers, most likely in the afternoon or evening” being predicted for the Wanneroo region.

A threat of rain will likely increase the number of teams willing to gamble on starting with the soft rubber, fearing they will not be needed later on.

While the teams weigh up the multitude of options for the race, Saturday’s double-winner Mark Winterbottom says that making the most of the morning’s qualifying session will be half the battle.

“Qualifying is going to be key,” said Winterbottom.

“We saw Jamie have an issue in qualifying and be nowhere in the race and then he’s on the front row for the second one.

“Qualifying is key and then the race kind of dictates itself from there.”

“Qualifying is the easiest time to pass cars,” added Fabian Coulthard, who finished third in Race 8.

“If you can qualify up the front it makes your day a hell of a lot easier. We’ll see how we qualify and the strategy will follow that.”

The V8 Supercars will hit the track for a final 15 minute practice session at 1055 local time before qualifying at 1200 and Race 9 of the championship at 1420. 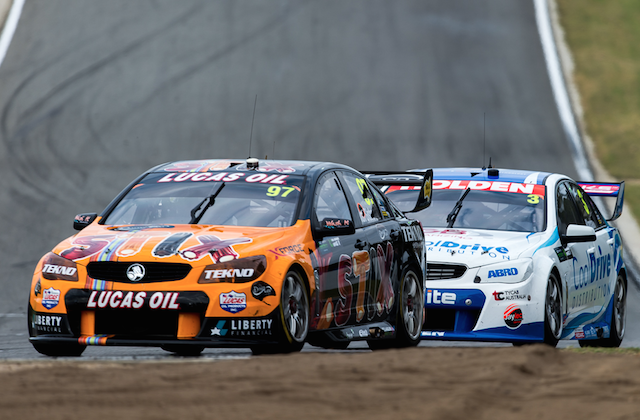