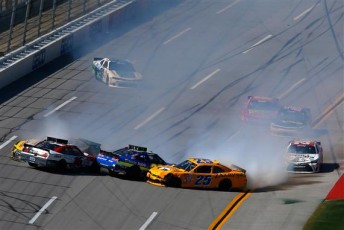 The ‘Big One’ i the XFINITY Series race at Talladega

For the second week in-a-row crew members on the NASCAR pit road have been injured in a racing incident during the XFINITY Series event at Talladega Superspeedway.

Ironically it was the same car from last week’s fire which was involved in this incident, when Brendan Gaughan’s Richard Childress Racing Chevrolet slid down pit road, hitting the inside wall one pit stall before the Biagi DenBeste Racing bit box.

One crew member was treated and released, while the second was transported to a local hospital for further evaluation.

The accident occurred when a group of cars were slowing to come to pit road, while another group behind failed to stay outside and crashed into the back of them.

The race was red flagged for just over seven minutes before resuming with Joey Logano going on to win the race for Team Penske.