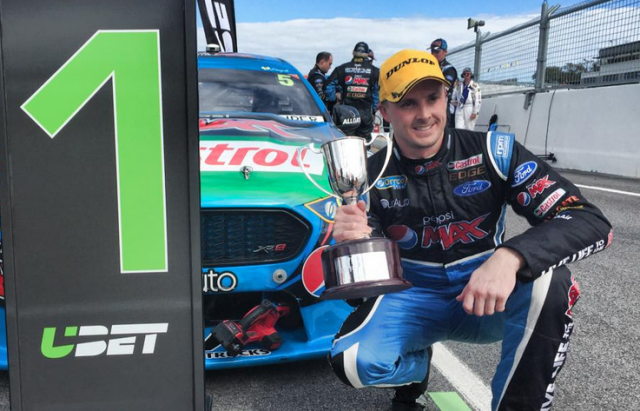 Winterbottom beat his pole-sitting team-mate to the first corner and was not headed for the remainder of the 25 laps.

Mostert appeared the quicker of the two for much of the run but never made a serious passing attempt, eventually taking the flag 0.6s adrift in second.

“My car was actually struggling a bit,” admitted Winterbottom afterward.

“Chaz had the quicker car but I managed to get him off the line.

“We will need to tune it up now but to get a one-two is just awesome.”

Craig Lowndes completed the podium from Shane van Gisbergen, Jason Bright and David Reynolds in a largely uneventful race among the front-runners.

It was a tough afternoon for the Holden Racing Team, with Garth Tander retiring from fourth in the early stages due to a problem with his Commodore’s left-rear suspension.

Team-mate James Courtney held sixth for much of the race before falling back to 10th by the flag as his tyres faded.

Courtney’s race had also included early contact with Reynolds on the back straight as the Ford driver attempted to follow Bright through on the HRT entry.

Reynolds momentarily took to the inside grass during the battle, but managed to escape without damage.

Walkinshaw stable-mate Tim Slade dropped from eighth to 16th with a late off at Turn 1, compounding the factory team’s struggles.

Jamie Whincup found it tough going from 21st on the grid, rising to just 15th by the flag.

The Red Bull Holden driver will join pole-sitter Winterbottom on the front-row for the afternoon’s second 25 lap heat.