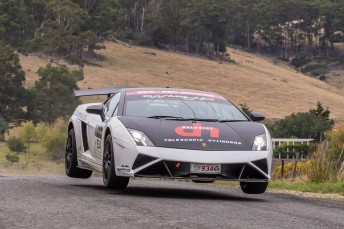 In the Showroom category for production cars, Tony Quinn led from start to finish in his brand new McLaren 650S, while South Australian Craig Haysman secured his first Classic Outright title after a brilliant drive in a 1981 Triumph TR7 V8.

Jason White went into the sixth and final day with a lead of 74 seconds, but the flying Glenney set about reducing the gap with scintillating speed in his Nissan GT-R. After two stages he had cut the gap to 42 seconds and was eyeing an unlikely victory.

But White, struggling with mechanical issues, managed to hold on, crossing the finish line 26 seconds clear to claim a popular win.

“We had a slipping clutch this morning, so I just had to back off a bit and manage it,” White said. “It was fairly bad and we almost thought that was the end of our Targa. We were pretty sure we weren’t going to make it.

“We managed to bleed off a bit of time on each stage, but that wasn’t the plan for the final day. It was a massive relief to get to the finish – I’ve never come so close to thinking it was all over.

Having dropped a minute and 24 seconds with mechanical problems on Day 1, Glenney’s comeback was remarkable, and he finished the event well clear of last year’s winner, Burnie driver Jamie Vandenberg in another Nissan GT-R.

Two-time Modern winner, Tony Quinn, claimed his first Showroom title after a flag to flag victory, ahead of the 2012 Renault Megane of TV personality, Grant Denyer.

While Quinn’s victory was not unexpected, Denyer’s performance surprised many, although he has a long motorsport history, including contesting the Bathurst 1000. He won several stages, and finished 38 seconds ahead of the Ford Mustang of Victorian Craig Dean.

“The biggest thing I’m taking away from this week is the difference between driving a four-wheel-drive car for so long and jumping into a high performance two-wheel-drive showroom car – it’s just a totally different exercise,” Quinn said.

“While the four-wheel-drive cars are faster and they can put up with a lot more, the two-wheel-drive deserves a lot more attention and focus from the driver, because it just hasn’t got that ability to pull you out of trouble. But I’ve enjoyed myself this week.”

Denyer was thrilled with his second placing.

“Compared to my last Targa a couple of years ago, I had to drive much harder, which makes our result more rewarding,” he said.

“I always forget how stunning, awe inspiring, hard and long the event is, so it’s incredibly rewarding for all those reasons.

“We were praying for a few wet days to slow down the McLaren and were hoping for that to pressure him, but he did an immaculate job and left it up to me and the Mustang to fight it out for second place.”

In the Classic Outright competition, Craig Haysman came away with the win on his fifth attempt. Early leader, Pete Nunn, retired his Porsche with a blown engine, allowing Haysman to control the pace thereafter, winning by over three minutes.

A great battle between Peter Ullrich (1963 Jensen CV8) and Barry Faux (1985 Mazda RX7) was finally decided on the very last stage, when Faux outpaced Ullrich to move up a place and claim second.

“It’s a huge relief to finally win. We put in a massive effort preparing the car this year,” Haysman admitted.

“We wanted to make sure we came down with a strong car, which was the best-prepared we’ve ever had.

“It’s something I’ve been aiming for for five years and to achieve that result is just amazing.”

The handicap classes are won by the 1963 Jensen CV8 of Peter Ullrich (Early Classic), and the 1982 Porsche 944 of Leigh Achterberg (Late Classic) while 1. Wayne Clarke and Trevor Berriman nursed home their 1938 Dodge Speedster Special in the Vintage class.